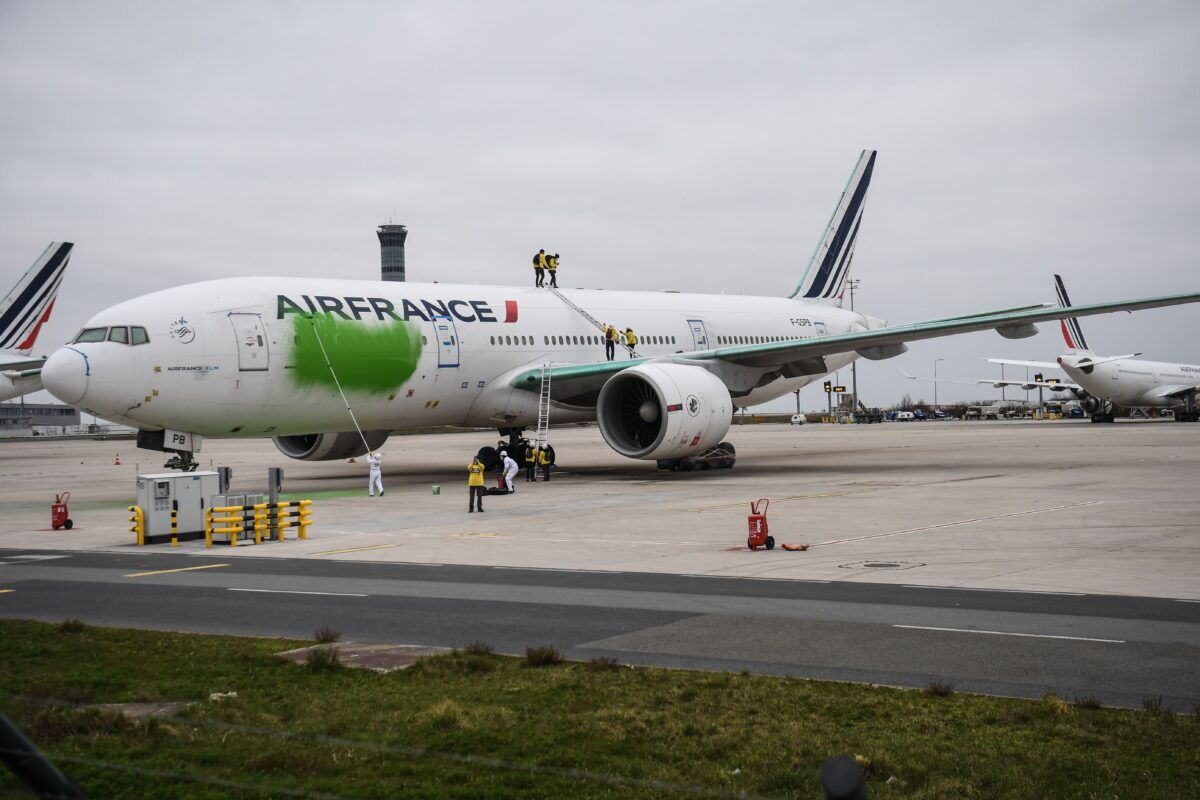 An Air France Boeing 777 has been vandalized by environmental protesters at Paris’ Charles De Gaulle Airport. A group of activists from Greenpeace bypassed security at the facility and gained access to the location of the Boeing 777, then proceeded to spray paint the aircraft green.

A team of activists from Greenpeace have bypassed security and gained access to a stored Air France Boeing 777 today, and are in the process of painting it green. The people, dressed in white overalls and wearing vests saying ‘greenwashing in progress’, erected ladders and used green spray paint on the fuselage of the aircraft.

Greenpeace hits out at the notion of a ‘green’ plane, something that France has been targeting the development of with its funding. They say that none of the solutions proposed, including biofuels, hydrogen and electric, will work. The statement says,

“In addition, whatever “green” aircraft we are offered, it will not provide a miracle solution to absorb the volume and growth in air traffic that we experienced before the Covid crisis, due in particular to the issues of resource availability (land, biomass, renewable electricity, etc.) and competition with other uses and sectors.”

While the damage to the aircraft is one thing, the question of how they gained access to the plane is another. The incident comes less than a year after around 30 Extinction Rebellion protestors disrupted activities at Paris Orly airport.

Damage to the aircraft

The aircraft being vandalized is a 22-year-old Boeing 777-200ER registered F-GSPB. Its last commercial flight was on March 17th, 2020, when it arrived at CDG from Rio de Janeiro. Since then it’s been parked at the airport.

Air France is retiring some of its 777-200ERs, having flown the first of four to be phased out over the next few weeks down to Tarbes in mid-February. It’s not known whether this particular aircraft was one that was destined for retirement or not.

If it is to be put back in service, it’s likely to need a complete repaint. This will come at a high cost for Air France, something the airline is inevitably going to seek to claim back from the Greenpeace activists through the courts. The one saving grace is that, because the aircraft was tucked up in storage, all sensors and other sensitive equipment will have been covered up, so shouldn’t have been damaged by today’s activity.