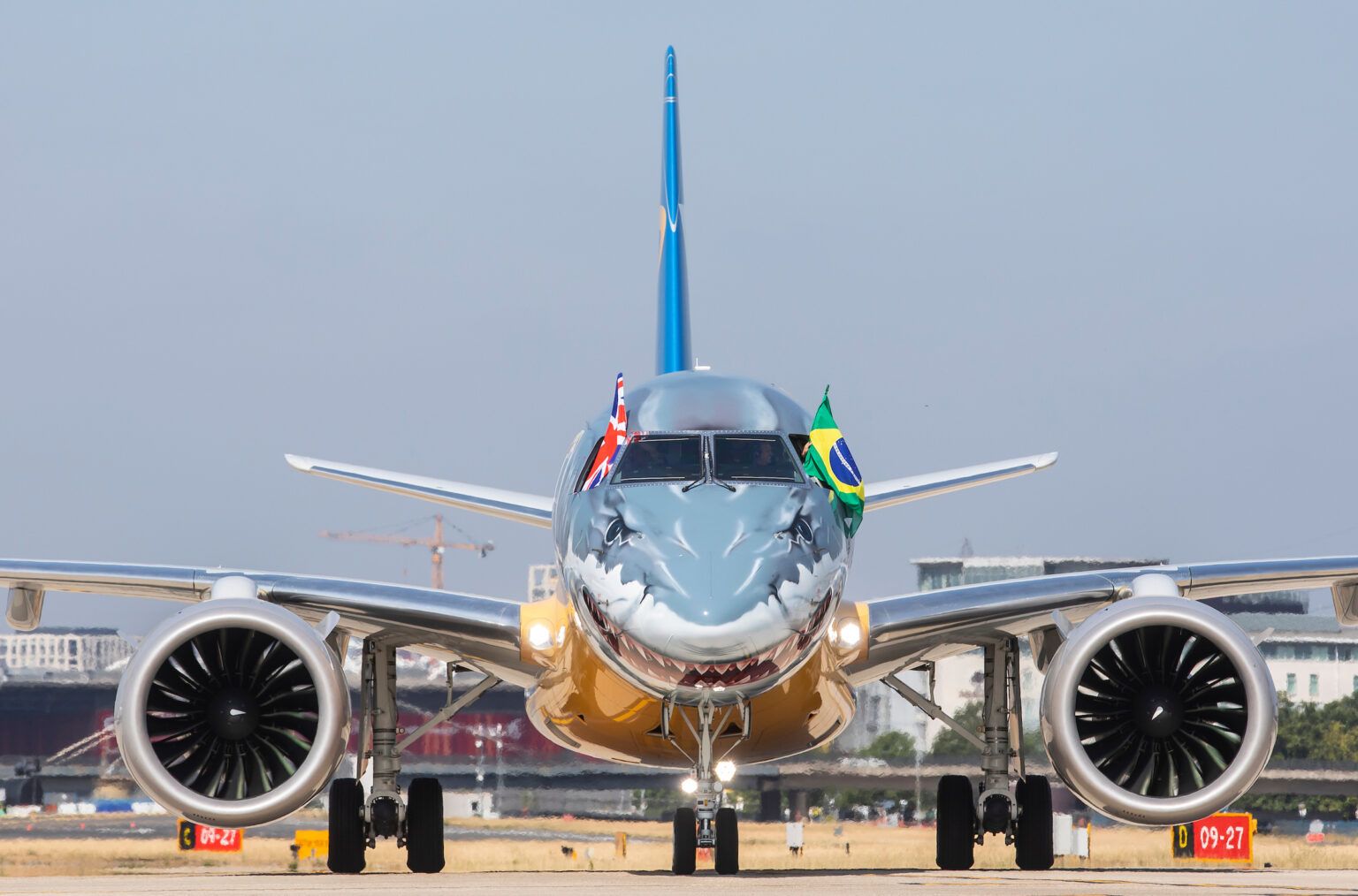 Its interesting city center location limits the number of aircraft able to fly to London City Airport. The airport has unusually steep approaches and departures, meaning that aircraft types must receive specific certification to use the airport. Now, almost three years after it visited, the Embraer E190-E2 has received such certification.

On July 13th, 2018, something interesting happened at London City Airport. An aircraft with a shark livery landed at the central London facility at 10:41 in the morning. The flight stood out, not only because of the livery but also as it was the first time that the Embraer E190-E2 had landed at the airport.

The visit was part of the process to get the E190-E2 certified for steep approaches, a requirement to land at London City Airport. Aircraft flying to the airport also need to land on the short runway (1,508m of 4,948ft) while meeting strict noise standards due to the city center location.

EASA has now certified that the E190-E2 ticks all of these boxes, awarding certification to the aircraft on May 11th. This is good news for Embraer and good news for the airport. London City has invested in building eight new stands alongside a new taxiway eliminating the need to backtrack on the runway. According to Alison FitzGerald, London City’s COO, these eight new stands were built with the Embraer E2 in mind.

What is a steep approach certification?

Steep approach certification is exactly what it sounds like. Typically, aircraft will approach a runway at an angle of around three degrees. At London City Airport, this is almost double, clocking in at 5.5 degrees. According to Embraer, the steeper approach aims to reduce noise pollution for surrounding areas.

To land at the airport, aircraft need additional certification and modification, while the crew must also gain further training. In the case of the E190-E2, Embraer modified the software on the aircraft to allow such a steep approach while adding a steep approach switch in the cockpit to avoid the system activating when not needed.

As mentioned, pilots flying into London City need special steep approach training. Here, Embraer has another trick up its sleeve. The E190-E2 shares the same cockpit as the E190, which is already certified to land at London City. As a result, pilots already qualified to land the E190 at the airport require no additional training.

While the ongoing aviation crisis currently limits operators at City, the Embraer family is a crucial part of the airport’s operations. BA Cityflyer, KLM Cityhopper, LOT, Alitalia, and Portugalia were all regular operators of Embraer to London City Airport.

“Embraer aircraft represent 70% of aircraft movements at this iconic airport, in the heart of one of the world’s greatest cities. This is a source of great pride for Embraer, London City feels like home. We look forward to E190-E2s joining the Embraer jets already flying from London City.”

Remember When: Airbus Flew All Its Current Aircraft In Formation