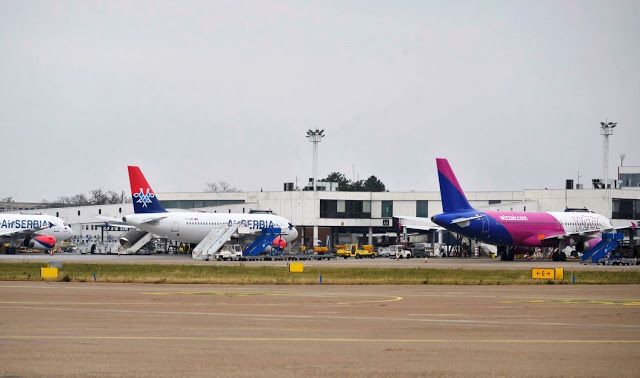 Wizz Air announced its 41st base in Sarajevo last week with plans to station an Airbus A320 aircraft in Bosnia and Herzegovina’s capital from May 20. It will result in the launch of nine new routes and the addition of 250.000 seats in and out of Sarajevo this year. However, Wizz Air’s expansion is expected to have an impact on both Croatia Airlines and Air Serbia, which rely on a sizeable numbers of transfer passengers on their flights to and from Sarajevo. Although neither of the two carriers are by any means the busiest feeder airlines out of Bosnia and Herzegovina, they have a dominant position on routes Wizz Air plans to introduce. The budget airline will launch flights to Charleroi, Copenhagen, Dortmund, Eindhoven, Gothenburg, London Luton, Memmingen, Basel and Beauvais.
During the last normal year in commercial aviation, in 2019, Turkish Airlines was Sarajevo’s largest transfer carrier, transporting 21% of all transfers. It was closely followed by Austrian Airlines at 20%, Pegasus at 13% and Lufthansa with a 11% market share. Croatia Airlines handled 7% of all connecting traffic, while Air Serbia stood at just 3%. The situation somewhat shifted in 2020. While Turkish Airlines remained the busiest feeder carrier, Air Serbia pushed up its transfer share to 6%, while Croatia Airlines’ position remained unchanged. However, the two national carriers are dominant on a number of routes which will now be covered by Wizz Air, which is expected to have an effect on their loads too.
In 2019, Air Serbia saw the most connecting traffic to and from Sarajevo from Amsterdam, followed by Paris, Zurich, Copenhagen and Stockholm. Wizz Air is looking to cover Amsterdam through its Eindhoven operations, Zurich through Basel, which is just over ninety kilometres from Switzerland’s largest city, as well as Paris, which will be served out of Beauvais. On the other hand, Croatia Airlines’ top origin or destination points for Sarajevo were Frankfurt, Zurich, Amsterdam, Skopje, London, Paris and Brussels. Croatia Airlines and Air Serbia are almost tied in their transfer traffic share on flights to Amsterdam (Croatia Airlines second and Air Serbia third after Austrian), as well as Paris (Air Serbia second, Croatia Airlines third after Austrian). Air Serbia dominates on transfers to Copenhagen with 60% of the market, while Croatia Airlines leads on transfers to Zurich (second after Austrian) and Brussels (second after Lufthansa).
Both Croatia Airlines and Air Serbia saw their operations impacted in Skopje once Wizz Air established a base in the Macedonian capital and began to significantly expand its operations. However, Wizz Air’s base opening is expected to have the biggest impact on bus coaches which remain a popular choice for international travel for many. Furthermore, the budget airline is expected to generate a new group of travellers, as has been the case in all the former Yugoslav markets it stationed aircraft in.