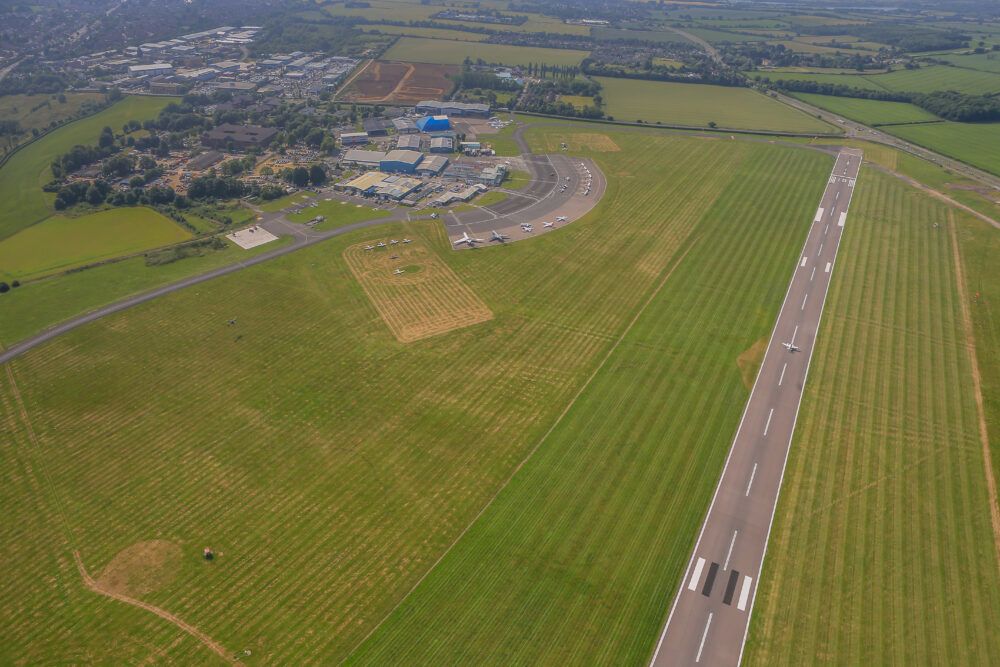 When one thinks of London’s airports, six will generally spring to mind. City, Gatwick, Heathrow, Luton, Southend, and Stansted all serve the British capital with regular commercial flights. However, another British airport also features the ‘London’ prefix. London Oxford Airport is situated just outside the famous university city, but has not enjoyed such commercial success.

Oxford City Council established Kidlington Airport, approximately 10 km north-northwest of the ‘City of Dreaming Spires,’ in 1935. Its purpose at the time was to act as a municipal airport, although this changed with the outbreak of World War II. Known as RAF Kidlington, it housed various squadrons during the conflict.

After the war, Kidlington Airport quickly gained increasing significance as a general aviation facility. Indeed, by the late-1960s, it was experiencing over 200,000 annual aircraft movements. This ranked it second in the country by this metric, just 10% lower than London Heathrow.

The airport’s runway 01/19 is around 1,550 meters (5,100 feet) long and has an asphalt surface. British entrepreneurs David and Simon Reuben purchased the facility in 2007. Under the ownership of these property investors, who The Times named as Britain’s second richest family in May 2020, the airport began to take a more commercially-focused approach.

2009 saw scheduled airline services commence at the airport. At this point, its name changed to London Oxford Airport, a move which was met with opposition from the Oxford Civic Society. The group claimed this title to be misleading, given that the airport is almost 100 km, and more than an hour’s drive, from the center of London.

Nonetheless, the name remained, with hopes that it would increase the airport’s international profile. Its first scheduled airline service ran from July to September in 2009, when Air Southwest operated a weekly rotation to the Channel Island of Jersey.

The airport’s most high-profile international route followed in December that year. This saw Swiss regional carrier Baboo operate weekly flights throughout the winter season to Geneva using De Havilland Dash 8-400 turboprop aircraft. The airline partnered with Alitalia to give passengers the option of connecting through to Rome in Geneva.

Limited to the British Isles

Since this brief period of connectivity with mainland Europe, Oxford’s scheduled services have remained within the British Isles. Varsity Express announced the launch of a service to Edinburgh in January 2010. However, it only lasted a week, operating just 11 flights before the airline folded in March 2010.

Two years later, Manx2 announced that it would commence a daily scheduled service to  Jersey and the Isle of Man in May that year. With load factors comparatively high at around 60%, Manx2 added a Belfast service in the summer. However, bookings fell in the winter, and the service ceased in January 2013.

Minoan Air served Dublin and Edinburgh from Oxford for five months in 2013. However, load factors were low, with 6,000 passengers traveling on 500 scheduled flights in this period. Averaging 12 passengers per flight, this left its Fokker 50s just a quarter full. Finally, Blue Islands briefly re-established Oxford’s weekly Jersey service in 2014, running from May until September.

The fact that no airline has been able to sustain a service at Oxford hints at a bigger problem for the airport. Its limited size means that it can only cater to regional destinations, and ground transport at the airport is also minimal. Furthermore, Oxford is well within the catchment area for the much larger and more-established Birmingham and London Heathrow Airports, both of which have served the same destinations as those targeted by Oxford. As such, there is little to persuade passengers in the area to fly from their local regional airport.

Nonetheless, the airport does serve a significant purpose today, as an important hub for pilot training. Much like Gothenburg City Airport, it has returned to providing impressive general aviation facilities since scheduled passenger services ceased. Oxford particularly comes into its own during the Formula One season, as it is the closest airport to the British Grand Prix in Silverstone, Northamptonshire. It will certainly be interesting to see whether scheduled services ever return there.