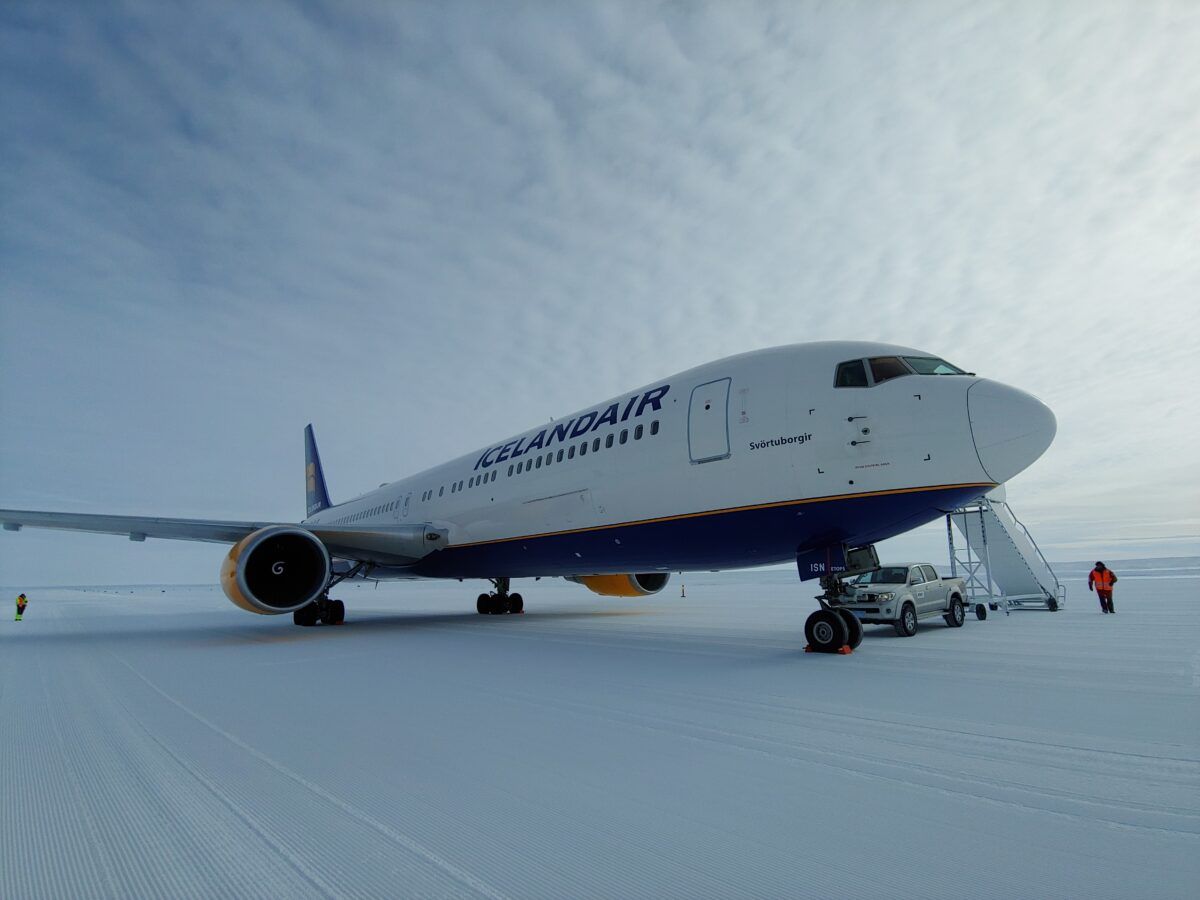 Even though Icelandair’s aircraft are based just outside of the Arctic Circle, one of its Boeing 767-300ERs took a trip to the other side of the globe to Antarctica last week. The jet was operated by Loftleiðir, which is Icelandair’s charter subsidiary. Its mission was to offload provisions for staff at the Norwegian Polar Institute’s Troll Research Station, who will remain there during the continent’s winter season. The plane also picked up scientists to bring them back to Norway after their service over the summer.

The Troll research station is in the Queen Maud Land region and is the base and starting point for glaciological, biological, and geological fieldwork during the summer. Moreover, throughout the year, the Norwegian Polar Institute says it is a base for the ongoing monitoring of “meteorology, radiation, atmosphere, upper atmosphere, environmental toxins, and seismology.”

Icelandair shares that a lot of careful planning went into the trip due to the rare conditions encountered in Antarctica. Altogether, there were six pilots, 13 crew members, and a flight engineer onboard the 767 to ensure that operations went smoothly.

The operation started at Iceland’s Keflavík Airport at 18:09 GMT on February 24th. It paused at Cape Town, South Africa, at 10:07 SAST the next day, for the aircraft to refuel and the crew to rest.

Some members of the team continued on the February 26th flight from Cape Town to Antarctica while the rest remained in South Africa. This second flight was another 4,332 km south for a duration of 5 hours and 43 minutes and took the crew to Troll.

The team didn’t stay on the ground for long. After two hours, the 767 headed back north with passengers on board. The plane stopped at Cape Town again to pick up fresh crew and then landed in Oslo, Norway.

The jet then finally ended with a leg back to Keflavík at 14:47 GMT on February 28th. Bad weather was forecast in Antarctica, but flight commander August Hakansson played down the conditions and said the worst weather of the trip was witnessed when landing back in Iceland.

There were nonetheless some concerns during the operation. However, the issues were quickly resolved by staff on the ground.

“The Norwegians have built a runway on the blue ice that is special because of its strength and structural nature. It has been beaten down with constant hurricane-force wind that has squeezed the air bubbles out of the ice, and it appears deep blue. And because of its solidness it can hold a massive airplane as the B767 and is really smooth,” copilot Bjartmar Örn Arnarson said in a logbook entry shared in a statement to Simple Flying.

“At that time when crossing into the Antarctic territory we got a message from Troll. There was a problem with the runway. They had found a hole and were preparing to repair. The Troll crew managed to temporarily repair the hole and mark it properly. A little setback but we can still continue our task.”

There was a lot of buzz surrounding this trip, but this isn’t the airline’s first rodeo. Six years ago, Icelandair became the first commercial carrier to land an aircraft on a blue-ice runway in Antarctica.

Altogether, despite the cold climate, the crew members were met with a warm welcome when they landed on the ice in Troll last week. After a couple of hours of servicing and exchanging greetings, the Boeing 767 took off in a “light northeasterly breeze” of -15°C.