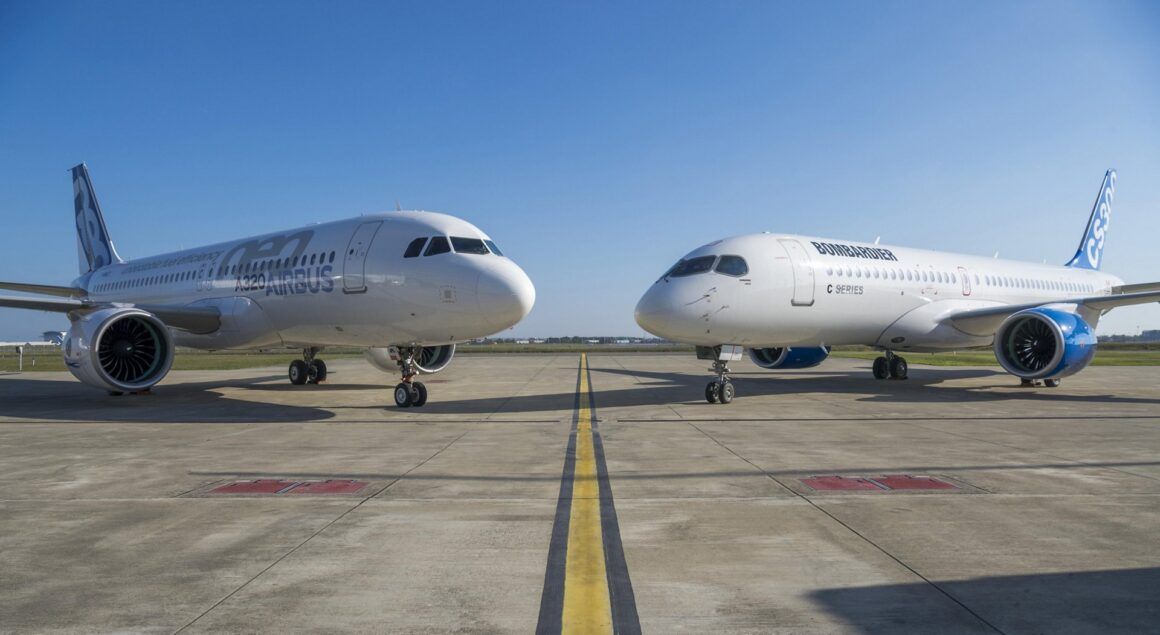 The Bombardier C-Series was a great aircraft, but it did not sell so well. Sales increased significantly once Airbus took control of the program. Why did Airbus make this acquisition, and why has the aircraft been so successful rebranded as the Airbus A220?

The C-Series was launched in 2008, announced at the Farnborough International Airshow. It was designed to be a strong competitor in the 100-150 seat next-generation, efficient aircraft category – an area that Bombardier felt was underserved by Boeing and Airbus.

Bombardier designed an excellent aircraft. It offered a composite fuselage, and new engine and aerodynamic developments. These brought reduced operating costs for airlines and gave passengers a spacious and quiet cabin.

Despite the excellent design and market potential, sales struggled. Bombardier only took 402 orders for the two variants, over around ten years it was marketed.

Taking control of the C-Series

Airbus announced a 50.01% majority stake in the C-Series program in October 2017, for only token cash investment (it was not until July 2018 that this got regulatory approval though). This gave Airbus control of the program, with Bombardier retaining 31% and Canadian investment company Investissement Quebec holding 19%. Bombardier exited in early 2020, and Airbus’ stake was increased to 75% (with Investissement Quebec holding the remainder).

The Bombardier CS100 was rebranded as the Airbus A220-100 and the larger CS300 as the A220-300. Since taking control, Airbus has increased the total order for the A220 to 649 as of March 2021. Orders increased 50% in just the first year over what Bombardier has achieved in around 10 years of marketing the plane.

So why the purchase, and why has the aircraft done so much better with Airbus? The main reason is the stability and brand that Airbus brings. Even though airlines knew the C-Series was a great aircraft, there were concerns over the security of the company. And with that, its ability to commit to and develop the aircraft.

Bombardier had struggled to make sales for several reasons. Firstly, the market situation was not helpful. With lower oil prices at the time, many airlines were looking to buy or lease older aircraft (such as the A319 or the Boeing 737) rather than buy new ones. With fewer customers, Bombardier suffered financially. In 2014, it laid-off workers and restructured the company into separate business units.

Secondly, the program had suffered delay, cost overrun, and early engine problems. And also, some think that Bombardier did not sufficiently market the aircraft. These factors together made it hard to sell. Not only was the market down for new aircraft, but it is also even harder to sell new aircraft when customers are unsure about your future.

Bringing Airbus onboard in 2017 was a win-win situation. It gave the backing of a larger and more trusted manufacturer. Sales would increase, and Bombardier went back into profit. The timing was right, too, with the oil price increasing and more airlines looking to replace older aircraft.

Another reason for the purchase by Airbus was competition from Boeing. Delta had already made an order for 75 aircraft from Bombardier. Boeing, however, had accused the company of offering the aircraft at an unfairly low price on the US market. This resulted in plans to impose a 300% import tariff on the Canadian sold aircraft.

Once Airbus took control of the program, this sale went through without import taxes (with Airbus having a US operation), and the order was soon increased. Likewise, JetBlue was also swift to make an order for 60 aircraft.

Since then, orders have increased further. Air France-KLM had ordered 60 aircraft (with 60 more options). Delta has increased orders, and 60 aircraft are destined for Breeze, alongside many smaller orders.

The trust in the Airbus brand has paid off as well. Airbus has already announced several major updates to the A220 family. In 2019, it confirmed plans for an increased payload and increased range, and in March 2021, the range of the -300 was enhanced further.