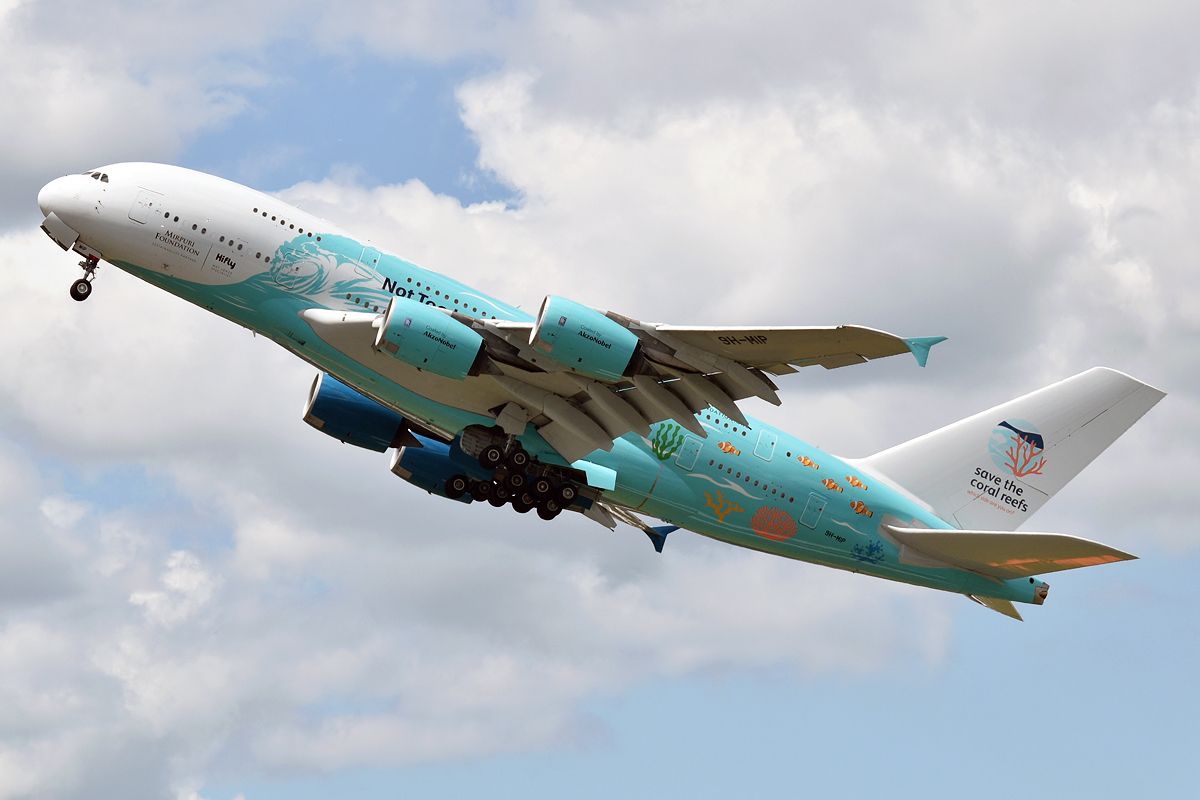 Hi Fly Malta is a Maltese subsidiary of Portuguese charter airline Hi Fly. The carrier is known for having operated an Airbus A380 in a striking ‘Save The Coral Reefs’ livery. This paint scheme raised environmental awareness, warning against coral reef destruction on its travels.

As a charter aircraft, it was able to spread this message all over the world. But which airlines leased 9H-MIP during the ex-Singapore Airlines A380’s time at Hi Fly Malta? Let’s have a look at some examples.

Low-cost carrier Norwegian was one of 9H-MIP’s more prominent users between 2018 and 2020. One of the reasons it leased the aircraft was to clear a backlog of delayed passengers caused by the London Gatwick drone incident in December 2018. The A380’s extra capacity over Norwegian’s Boeing 787s was crucial in getting transatlantic passengers home for Christmas.

Reduced ‘Dreamliner’ availability also saw the aircraft return to Norwegian’s Gatwick-New York JFK route in August 2019. The following month, Norwegian operated 9H-MIP on its low-cost New York services from several other European cities, including Oslo, Paris, and Stockholm. The latter of these was the first-ever A380 flight out of the Swedish capital.

Summer 2019 also marked an aviation milestone for the African island nation of Madagascar. Its flag carrier leased 9H-MIP to temporarily replace an Airbus A340, which required engine work. In doing so, the aircraft became the first A380 to land in Madagascar, when it arrived in Antananarivo on a scheduled flight from Paris on June 30th, 2019. Curiously, a Wamos Air Boeing 747 operated the return leg to Paris instead of Hi Fly Malta’s superjumbo.

Senegal represents another African nation that saw a flight land from Paris operated by 9H-MIP in 2019. Technical difficulties with the Airbus A330-900 that typically operated this route brought Hi Fly Malta’s A380 into play for flight HC404 on April 19th, 2019.

In August 2018, Air Austral flew 9H-MIP to one of its most remote destinations. Again, the flight departed from Paris, which was evidently the place to go if you wanted to catch a glimpse of this rare aircraft! It flew thrice-weekly in late-August and early September 2018 to Saint-Denis on the Indian Ocean island and French overseas department of Réunion.

Venezuelan carrier Estelar Airlines had not been explicitly looking to lease 9H-MIP in July 2019. Indeed, it was already leasing another Hi Fly aircraft, namely an Airbus A340, at the time. However, when this plane needed to be sent for repairs, the A380 stepped in to fill the gap for two weeks. It operated Estelar’s scheduled services between Madrid and Caracas in this spell.

A charter for football fans

In each of the previous instances, airlines leased the A380 to provide cover or extra capacity on scheduled services. However, it has also seen action on one-off charters for sporting events, for which thousands of fans need transporting in a short period of time.

One of these was the 2019 Europa League final, which took place between British clubs Arsenal and Chelsea in Baku, Azerbaijan. With limited scheduled flights between the UK and Baku, several charters were operated before the game in May 2019.

The one that provoked the most interest from an avgeek’s perspective had to be that involving 9H-MIP. This represented the first-ever A380 flight out of London Stansted, which has limited facilities for handling such large aircraft. Chelsea ended up winning the match by a score of 4-1, capping off a great few days for anyone in the middle ring of the Chelsea fans/A380 fans Venn diagram!