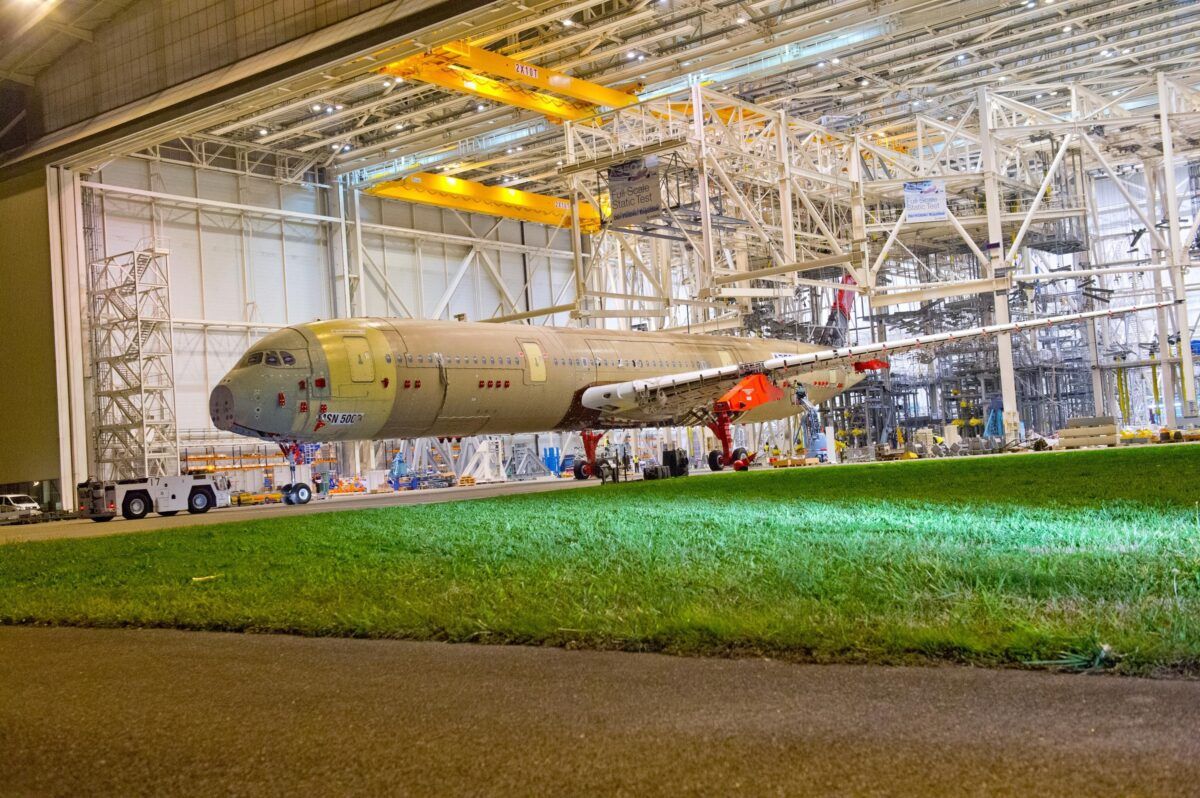 Airliners must undergo rigorous testing procedures before obtaining the certification to operate commercial flights. Test flights represent one of the more conspicuous aspects of these procedures, and generate huge interest among avgeeks and the media. However, what goes on on the ground plays an equally important role, even if this aspect is less conspicuous to the public. Let’s explore the world of static testing.

What is static testing?

Static testing allows engineers to analyze an aircraft’s structural integrity without needing to leave the ground. This is a useful part of the testing process that helps speed up the certification process, as it does not require a completed and fully functional aircraft. Indeed, as seen in the image above, Airbus undertook static tests on a basic airframe for its A350 XWB, which lacks components such as engines.

So, what do manufacturers look to achieve with static testing? Ultimately, the purpose of these procedures is to replicate the forces that the aircraft will be subjected to once it does take to the skies. Engineers do so by applying forces to areas such as the aircraft’s wings, fuselage, and tail.

These tests often push the pressure well beyond what the aircraft will ever experience inflight. This ensures that, if the aircraft can withstand such abnormal pressure, it will have a sizeable ‘safety net’ in terms of its typical operations. The tests simulate the aircraft’s responses to different forces inflight, providing engineers with information ahead of it taking to the skies.

Other advantages of static testing

Another advantage of using a static test airframe is that the aircraft is already safely on the ground in the unlikely event that something does go wrong. This means that danger to human life and property is greatly reduced, as a failure will not result in an aircraft crashing. It also has a financial benefit for manufacturers, as writing off a test airframe will represent a smaller financial loss than a completed and fully functional aircraft.

As we have established, static testing purposely subjects an airframe to significantly greater pressure than it would typically experience inflight. While aircraft can generally withstand this pressure, the unknown nature of testing does sometimes result in accidents.

For example, in September 2019, a door of a Boeing 777X test airframe was blown off during static testing. Thankfully, there were no injuries as a result, although Boeing was forced to temporarily halt the testing nonetheless.

However, later in the year, it emerged that the damage hadn’t just concerned a single door. Instead, the explosive decompression had ruptured the test airframe’s entire fuselage, writing it off. The weak point was said to have been the center fuselage, just behind the landing gear.

The incident occurred when the pressure was at 1.48 times the maximum load that the aircraft would typically experience inflight. This was just shy of the FAA target of 1.5, which must be held for three seconds. However, the aircraft was deemed to have got close enough to the target not to require a retest.

In any case, it is far better that the incident occurred on the ground, rather than in flight, which could have had potentially disastrous consequences. Ultimately, that is what aircraft testing looks to prevent, with safety, as always, being the driving force behind such procedures.