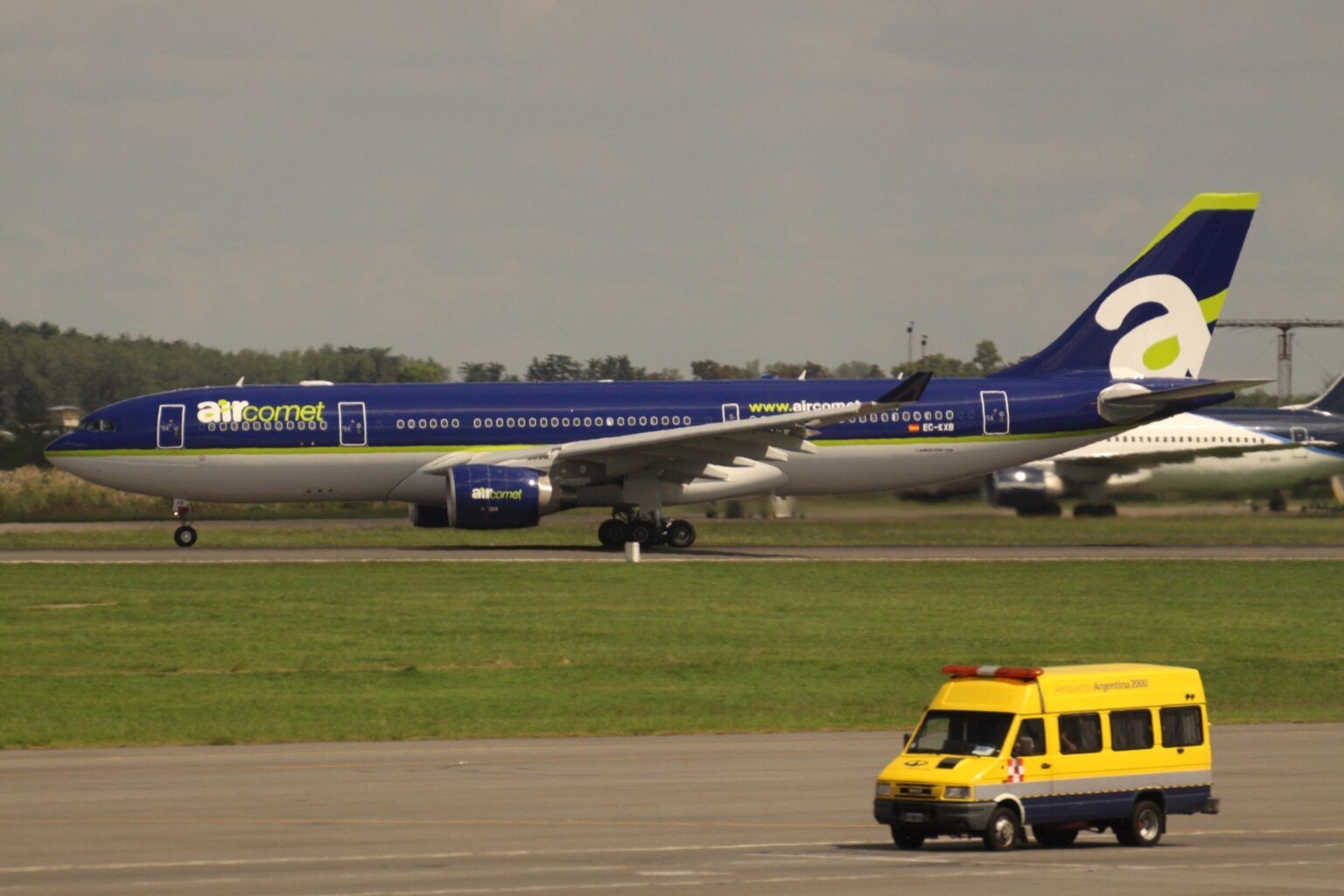 While everyone knows that Iberia is the national flag carrier of Spain and that Volotea, Vueling, and recently IAG acquired Air Europa, are Spanish airlines, did you know that Spain once had an airline called Air Comet? First founded on December 23, 1996, as Air Comet Plus, it acquired Oasis Airlines’ only plane, an Airbus A310. The Madrid start-up also took on many Oasis Airlines’ employees to be the new backbone of the carrier.

Similar to how Air Europa operates today, Air Comet Plus’s business plan was to provide long-haul flights to the Caribbean and South America from the Spanish capital and the Balearic island of Mallorca. Based at Terminal 1 of Adolfo Suárez Madrid–Barajas Airport (MAD), the newly formed airline started operations on 1 March 1997 with its single Airbus A310.

Air Comet is born as a full-service carrier

Fast forward to 2007, and we see Air Comet Plus being launched as a full-service carrier. Now, it was called simply Air Comet after having gotten rid of the ‘Plus’ from its name. Now wholly owned by Spanish multinational tourism company Grupo Marsans, Air Comet took over some of the now-defunct Air Madrid routes between Spain and Latin America.

Hoping to capitalize on both tourism, business, and families traveling between Spain and its former colonies, Air Comet flew from Terminal 1 at  MAD to the following destinations:

Along with the Latin American long-haul routes, it is also worth noting that Air Comet offered twice daily short-haul flights from Madrid to London Gatwick (LGW) and Paris (CDG) using 168 seat Airbus A320s. Grupo Marsans also advertised heavily in the UK press, promoting its flights from London Gatwick to South America via a change of plane in Madrid.

During its 13 years of operations as Air Comet Plus and Air Comet, the Spanish airline had, according to aviation enthusiast website Planespotters.net 20 aircraft. Comprised mainly of Airbus long-haul aircraft, Air Comet also leased a former Aerolineas Argentinas Boeing 747-200 and a McDonnell Douglas MD-83 that once belonged to Spanair.

The following aircraft made up Air Comets fleet:

The demise of Air Comet

Despite having big plans that included the purchase of four 620 seat Airbus A380s to put on its most popular routes to South America, Air Comet was facing a mountain of debt and competition from other airlines offering low-cost fares.

Due to mounting debts on December 21, 2009, a High Court in London returned a verdict favoring Germany’s Hamburg Commercial Bank after Air Comet failed to make leased aircraft payments. The Hamburg Commercial Bank, or HSH Nordbank as it was called, then owned Air Comets’ entire fleet and told the court that the Spanish airline owed them 17 million euros in missed payments.

Despite wanting the issue resolved and getting its aircraft back, the German bank said that owing to the Christmas holidays and the fact that so many people had purchased tickets, it was willing to not take its planes back for a couple more weeks.

Unfortunately for Air Comet, the airline did not even have enough money to pay for fuel and fees, leaving the Spanish transport ministry no choice but to pull the airlines’ operator’s license. Now unable to fly or sell tickets, Air Comet’s directors announced that the airline was bankrupt, laying off 640 employees and stranding 7,000 customers. The Spanish government had to charter four aircraft at 6.3 million euros to bring Air Comets passengers back to Spain.

On Friday, May 21, Spain announced that starting June 7, tourists from all parts of the world are allowed to visit, prov …

After a multi-month campaign to reassure its customers that the 737 MAX is safe to fly, Icelandair has returned the 737 …