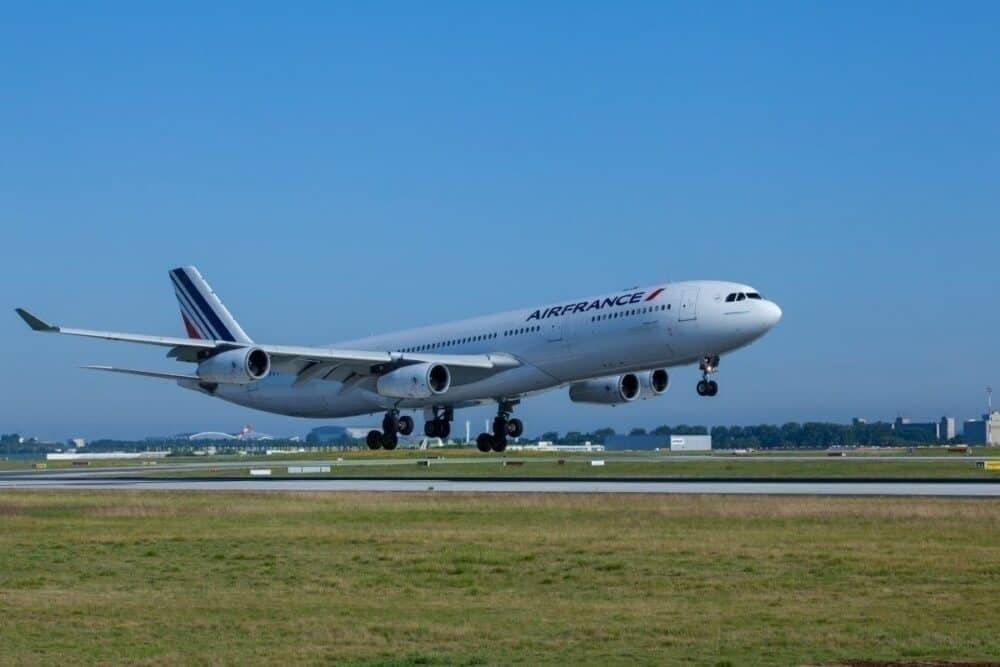 The slowdown in aviation in 2020 has led to the retirement of many aircraft. We have seen the 747-400 almost disappear from the sky and the early retirement of some A380s. The A340 has been retired by several airlines, including Air France. This article takes a look back at the fleet over the past 27 years with Air France.

Air France has a long history with Airbus and the A340. It was the launch customer for the aircraft back in 1993 (together with Lufthansa) and has operated a total of 30 over the years since. This has included (according to Airfleets):

The A340-200 aircraft did not last very long with Air France. The first two were sold to Lufthansa and Sabena in March 1996. One more followed in November 1998, sold to Air Tahiti Nui, and two more to AOM French Airlines in 1999.

Unfortunately, the A340 has been involved in two major incidents with Air France. The first to be lost was F-GNIA (the first A340-200 to be delivered to the airline). This was damaged beyond repair by fire whilst undergoing maintenance at Paris Charles de Gaulle airport in January 1994.

The second loss was an A340-300, F-GLZQ, in August 2005. It overshot the runway when landing at Toronto Pearson International Airport (as Air France flight 358). All passengers and crew survived, but the aircraft was destroyed.

Moving some aircraft to Joon

Air France set up a new subsidiary airline, Joon, in 2017. Its goal was to appeal to a younger generation of travelers. It started offering European short-haul flights (with the A320 and A321) and expanded this with long-haul destinations in 2018. These included Mumbai, Cairo, and Cape Town.

Long-haul flights were operated with A340-300 aircraft transferred from Air France. Between March and June 2018, four aircraft (F-GLZK, F-GLZN, F-GLZO, and F-GLZP) were repainted and moved to Joon. These had all entered service with Air France in 1998 or 1999.

Joon did not work out well for Air France, and it ceased operations in June 2019. It struggled with the low-cost competition and had difficulty differentiating itself. The high-cost and inefficient A340 did not help, and it had planned to take delivery of the A350, but this never happened. Following its closure, all four A340 transferred back to Air France (on 27th June). One of them, F-GLZN, was moved to storage almost straight away in July.

Retiring the last aircraft from April 2020

Air France started 2020 with three remaining A340 aircraft. Unfortunately, the slowdown in aviation led to the early retirement of all of these aircraft.

Which airlines still operate the A340?

Large, four-engine aircraft have suffered in the 2020 slowdown. They have been declining in popularity for many years as twins improve in both power and permitted range of operations. But the lowered demand in 2020 has seen the expedited retirement of many of these.

Simple Flying took a look at the remaining A340 operators in mid-2020. Lufthansa remained the largest operator. Its A340-600 fleet was stored during the slowdown, but it maintains 17 A340-300 aircraft. Other airlines still operating it include Swiss, Edelweiss Air, Azerbaijan Airlines, Air Madagascar, and Mahan Air.