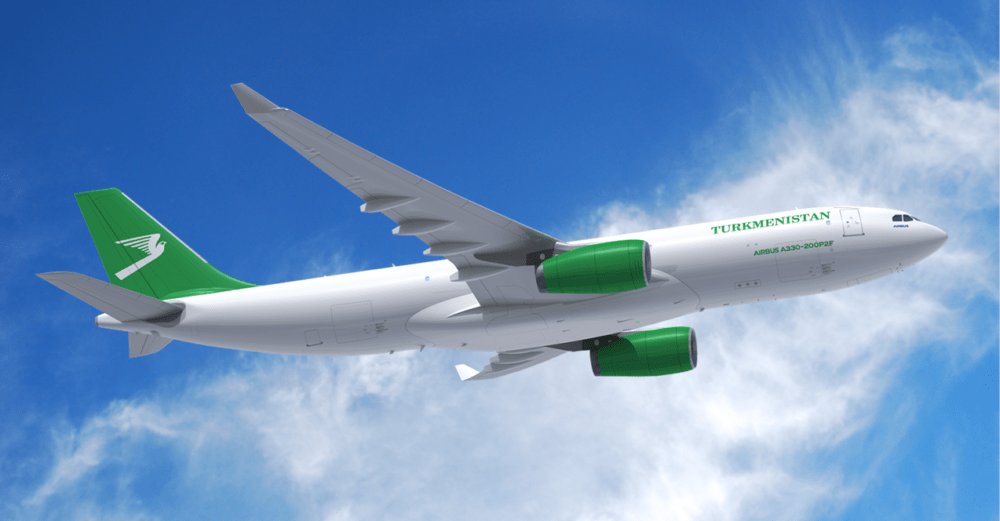 Wanting to take advantage of the country’s location, Turkmenistan Airlines has inked an agreement with European aircraft manufacturer Airbus for two Airbus A330 cargo aircraft. The widebodies will passenger to cargo converted fuselages and will be due for delivery in 2022.

Born out of the success of converting older Airbus models, the A330 passenger to cargo conversion, titled the A330P2F, was launched in 2012 as a joint venture. The program is backed by ST Engineering, Airbus and Elbe Flugzeugwerke GmbH.

According to the German firm, the A330P2F provides 30% more volume and 30% more payload while exhausting 20% less fuel burn when compared to the previously modified A300-600P2F. The A330P2F has already successfully been implemented into other fleets, most notably doing work for DHL in both Europe and Asia.

Being a widebody, the A330-200P2F offers a wide variety of loading options for pallets. In max formation, the aircraft can hold 23 88”x125” SBS cargo containers in the upper cargo hold with an additional 26 LD-3 cargo containers in the lower fuselage. Alternatively, the minimal formation for the aircraft can haul 3 96”x239” 20ft pallets in the former passenger cabin and 8 96” pallets with 4 LD-3s in the lower cargo hold.

Turkmenistan’s exact fuselage numbers or current user were not identified. However, it is expected that the aircraft’s conversation will occur in the 2021 calendar year. Airbus did note that the order is the first transaction made by the flag carrier and manufacturer in its history.

The aircraft will be implemented into the cargo arm’s current strategy of establishing themselves as a mainstay for operations between Europe and Asia. The strategy of playing middle man has worked for other carriers, including Silk Way Airlines of Azerbaijan and Etihad Cargo of the United Arab Emirates. Situated in the CIS region of Asia, the geographical location of Turkmenistan makes a hub and spoke style cargo hub possible and something the A330P2Fs will try to grow.

For Turkmenistan, the arrival of the A330 breathes new life into an aging cargo fleet. The Central Asian flag carrier has utilized a fleet of Ilyushin Il-76TDs to perform cargo operations before operations were suspended in April as a result of the outbreak of COVID-19. The airline’s fleet has not seen much action since then, relying more on commercial aircraft to do the cargo work. Turkmenistan’s passenger fleet includes an all-Boeing fleet of 737-700s, 737-800s, 757-200s and 777-200LRs. Being the flag carrier, the fleet is supplemented with VIP configured aircraft for the government including a Bombardier Challenger, Boeing 737 BBJ and 777-200LR in a VIP layout.