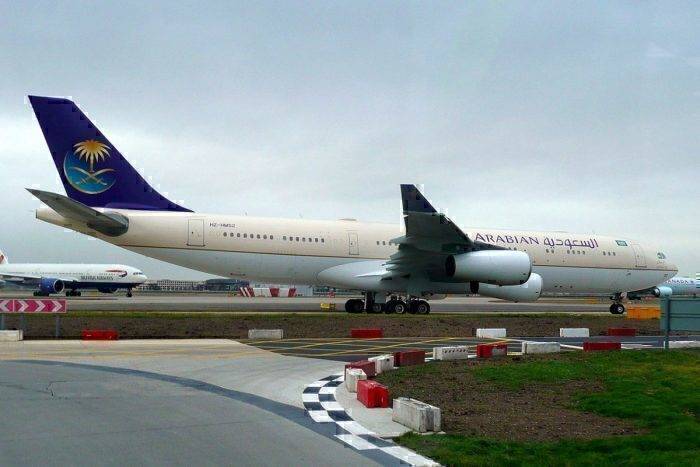 In 1998, the government of Brunei took delivery of a very unique Airbus A340. This aircraft was the only example of the European quadjet widebody’s ‘-8000’ variant. This government had intended for this special version to go to the brother of the Sultan of Brunei. But what exactly made the A340-8000 so unique, and where is it now?

According to FlightGlobal, Airbus developed the Airbus A340-8000 as an ultra-long-range aircraft for the Brunei royal family. It was a derivative of the A340-200. Launched commercially by Lufthansa in 1993, the -200 was the first variant that Airbus introduced. The A340-8000 was to be an addition to the monarch’s growing VIP fleet of private jets.

What gave the aircraft its unique designation was the fact that it was fitted with auxiliary fuel tanks. The extra fuel capacity gave it a range of more than 8,000NM (hence the name), or 14,800 km. This would enable the Sultan and his family to fly non-stop from Brunei to the USA or Europe.

The -8000 also featured the 275-tonne maximum take-off weight (MTOW) of the A340-300, and it could seat 239 passengers. Fit for a royal family, this variant was, of course, supposed to be configured with a luxury interior.

Airbus officially “delivered” the aircraft, whose manufacturer serial number (MSN) was 204, in November 1998. However, it supposedly never entered service. Instead, it is said to have spent several months parked at Berlin’s Schönefeld Airfield for several months. During this time, it was in an unfitted state, and kept under the management of Lufthansa Technik.

A year after the aircraft was built, it finally had its VIP interior installed. This delay fueled speculation that it had been put up for sale. According to Planespotters.net, the aircraft moved to Lufthansa Technik in Hamburg in August 2007. At this time, its registration changed from V8-AC3 to D-ASFB. It remained with Lufthansa Technik until February 2007, having been in storage in one form or another for nine years.

Then, in 2007, news broke that the Saudi Arabian Government had acquired the aircraft. According to Airfleets, the aircraft was delivered to its new owner on March 1st of 2007. It stayed with the Saudi government for three years, bearing the registration HZ-HMS.

In December 2010, it moved to ‘Saudi Royal Flight,’ the fleet belonging to the Saudi royal family. At this time, its registration was slightly altered, to HZ-HMS2. AIMS Airline Software reports that:

“The prestigious Saudi Royal Fleet is the dedicated airline for the Saudi royal family. Saudi Private Aviation is a top-tier international luxury flight services provider for elite clientele across the globe.“

It is uncertain how much longer the aircraft will remain in the private service of the Saudi royal family. However, it is unlikely that we will ever see the aircraft in regular commercial passenger service before its retirement.

Conviasa Takes Another Airbus A340

Conviasa has taken delivery of an Airbus A340-300. The plane officially arrived on December 31st in Caracas, Venezuela a …

What Happened To Air France’s Airbus A340 Fleet?

The slowdown in aviation in 2020 has led to the retirement of many aircraft. We have seen the 747-400 almost disappear f …