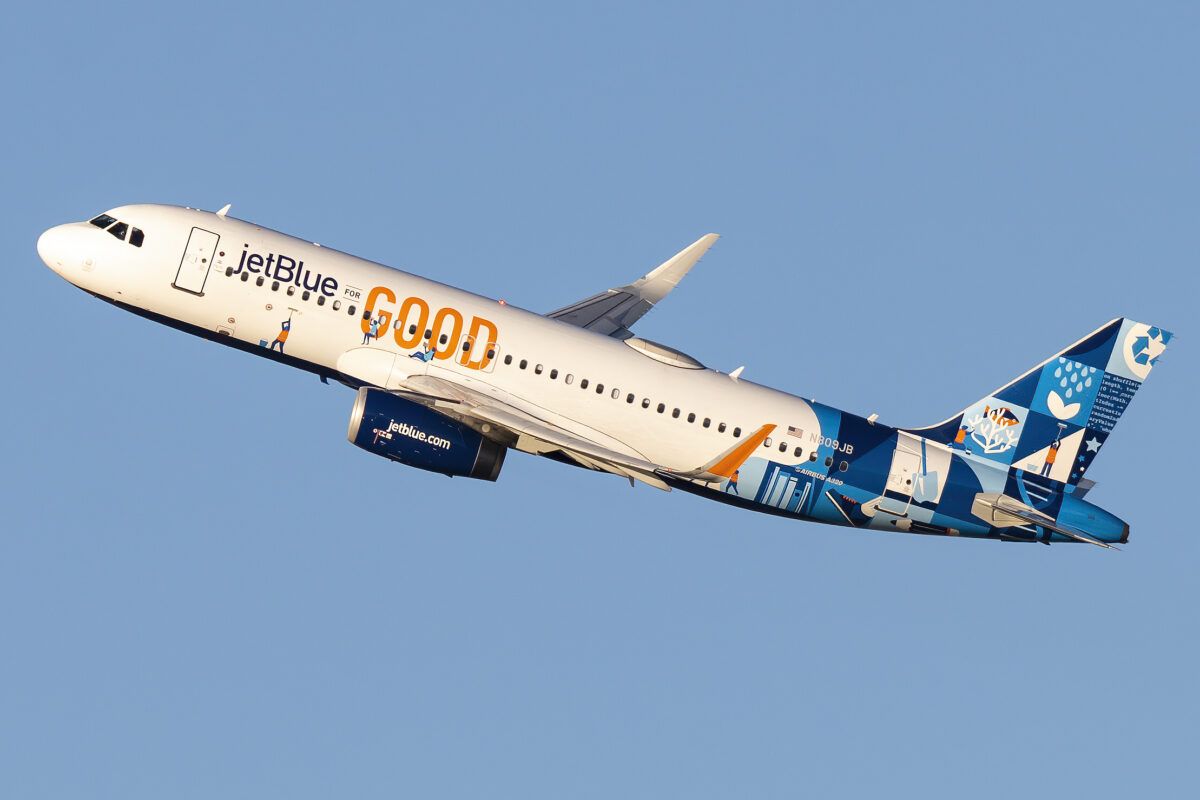 American low-cost airline JetBlue has shown impressive growth over the past 20 years. Since its launch in 2000, it has expanded to become one of the country’s top airlines. It worked hard to differentiate itself from the competition, with better onboard amenities and a new business class concept. And perhaps the best is still to come, with a revamped premium product and transatlantic services on the way.

JetBlue has its origins in 1999, with a new airline (originally named ‘NewAir’) being founded by David Neeleman. It took 75 slots pairs at New York JFK airport and began services to Buffalo and Fort Lauderdale, with two A320-200 aircraft (named Bluebird and Shades of Blue).

JetBlue now serves over 90 destinations in the US, the Caribbean, and Central and South America, with a fleet of 267 aircraft (based on Planespotters.net data). And new aircraft are on the way, including the A321XLR. Its first A220 was delivered right at the end of 2020.

David Neeleman has been key to the starting and success of JetBlue. The Brazilian-American entrepreneur had already been involved with the launch of two other airlines and spent time working at Southwest. His first airline, Morris Air, was acquired by Southwest Airlines. His second, WestJet, has grown to become the second-largest airline in Canada.

With JetBlue, he returned to the low-cost model in the US but aimed to do it better than the competition.  Of course, he brought some of the ideas from Southwest and took some new directions that have worked very well.

Neeleman stayed with JetBlue as CEO until David Barger replaced him in 2007. And Joel Peterson replaced him as chairman in 2008. That same year, Neeleman announced plans to launch Azul as a new Brazilian airline. And in 2018, he returned to a US focus with another new airline plan, Breeze Airways.

Expansion while other airlines were suffering

Right from the start, JetBlue saw strong expansion, despite the terrorist attacks in New York that took place just over a year after the airline started operations (although its IPO was delayed).

The New York Times reported in November 2001 how JetBlue had continued to secure a profit, unlike most other airlines. It also noted its load factor was among the industry’s highest at the time (at 76%), with costs around half that of major legacy carriers. Clearly, it was doing something right from the start.

Profitability was not to last that long, however. Rising fuel costs, in particular, hurt the airline. It posted its first loss in the fourth quarter of 2005. Management responded with an aggressive cost-cutting and revenue growth plan. It returned to profitability by the end of 2006.

This was a difficult time for all airlines, and JetBlue fared better than most. Other low-cost experiments (such as Delta Express) failed. America West and US Airways, both facing serious financial difficulties, merged in 2005. Northwest Airlines filed for bankruptcy in September 2005, eventually merging with Delta Air Lines in 2008.

Like other low-cost airlines, it focussed on point-to-point flights rather than hub-based operations. It also stuck with the consistent fleets that have worked well for many low-cost carriers. Its large fleet of A320 and A321 aircraft enables more efficient route, maintenance, and crew scheduling. Southwest, of course, has done the same with the 737.

But it made some other changes too. It added a fleet of smaller Embraer ERJ-190 regional jets. This allowed expansion to several smaller airports that would not be economical with larger aircraft. Explaining this strategy in a lecture at Wharton business school in 2006, David Barger said:

“A smaller airplane has some inefficiencies, but it allows us to mine markets that Southwest, Frontier, and America West aren’t in.”

It also chose to move away from the low-cost model of removing service and amenities for passengers, offering a more ‘full-service’ experience onboard.

More use of codesharing

JetBlue has been more open to cooperation and interlining agreements than most other low-cost airlines. In 2009, it began cooperation with Aer Lingus on domestic routes out of New York and Boston. This was upgraded to a full codeshare relationship in 2013. It also announced a codesharing agreement with Lufthansa the same year.

Now, in 2021, it has announced a new codesharing agreement with American Airlines. This has begun this month (February), covering 25 American and 49 JetBlue routes. Later in the year, they should start reciprocal mileage and frequent-flier benefits as well.

One of the ways JetBlue has differentiated itself is through its onboard offering. While many low-cost (and some full-service) airlines have dropped seat-back entertainment, JetBlue took a strategy of installing this on all its aircraft. It also offered satellite radio through the same system.

And it has stuck with it, kept content free, and expanded the offering. In recent years it has launched free WiFi for all passengers, and remains the only airline in the US to do so.

It also chose to offer seat selection when other low-cost airlines were dropping this.

Ultimately this strategy has worked well for JetBlue. Part of this is about treating customers well (Neeleman has expressed this too as part of Breeze’s strategy). But it also arose out of necessity to compete with other struggling airlines. Barger explained this well in his 2006 lecture at Wharton:

“Today, three out of every 10 seats flown are on a bankrupt carrier. We are growing our company and trying to fend off competition that is insensitive to price. In bankruptcy, companies have protection, and underneath that umbrella, they can offer very low fares. Independence Air is offering $59 from Washington, D.C., to the West Coast. How do you compete with that?”

JetBlue took its differentiation further in 2014, with the launch of a premium cabin. The new cabin, known as ‘Mint’ was installed on A321 aircraft flying transcontinental and Caribbean routes. The cabin offers 16 premium seats in a 2-2 and 1-1 configuration. Simple Flying looked at the routes and the seats in more detail previously.

This concept of business class at an affordable price has been a great success for JetBlue. It has now expanded to operate from five hubs, covering over 30 routes.

JetBlue began international flights in 2008, serving Mexico, the Caribbean, and South America. And in 2016, it became the first US carrier to resume commercial services to Cuba.

The airline plans a big step forward in international routes with its planned transatlantic flights starting later in 2021. London has been confirmed as the first destination, using the new A321LR aircraft. With the A321XLR also on order, there is talk of further routes, with Italy a potential next target.

Flying transatlantic is a big expansion for the airline, but what makes this more exciting is its  upgrade to its popular Mint product. It will install a new seat for its premium cabin, and has accompanied this with upgrades to soft products too.

This uses the Thompson Aero Seating’s VantageSOLO, a reverse herringbone lie-flat seat with plenty of space in a 1-1 configuration. The first row will feature studio-style space, with room for a guest.

With London to New York being the most profitable air route in the world and a big market for business travelers, of course, this is an exciting move. Offering a product that competes with the legacy airlines and outstrips some could work very well if it is priced right.

CEO Robin Hayes, confirmed the importance of this in a 2020 interview with Aviation Week, saying:

“London is the number one priority. That’s where the most demand is and that’s where the fares have been astronomically hiked for so long in business class.”

Of course, like all airlines, JetBlue has suffered during the slowdown of 2020 and into 2021. Simple Flying reported in late 2020 how the airline was burning up to $8 million a day, with a 45% to 50% decrease in year-on-year traffic.

Despite the slowdown, JetBlue has retained strong expansion plans. It has used the slowdown period to open 62 new routes. Looking forward, significant expansion is planned, with 24 new direct routes and a stronger focus on Miami.

There is still plenty of uncertainty about how long it will take for travel to recover post-COVID and how airlines will emerge. This strong commitment to new point-to-point routes, though, is surely the way to go (Southwest’s CEO agrees with this too). With strong route analysis of the best future opportunities, combined with an exciting transatlantic launch, 2021 and beyond could see even more success for JetBlue.