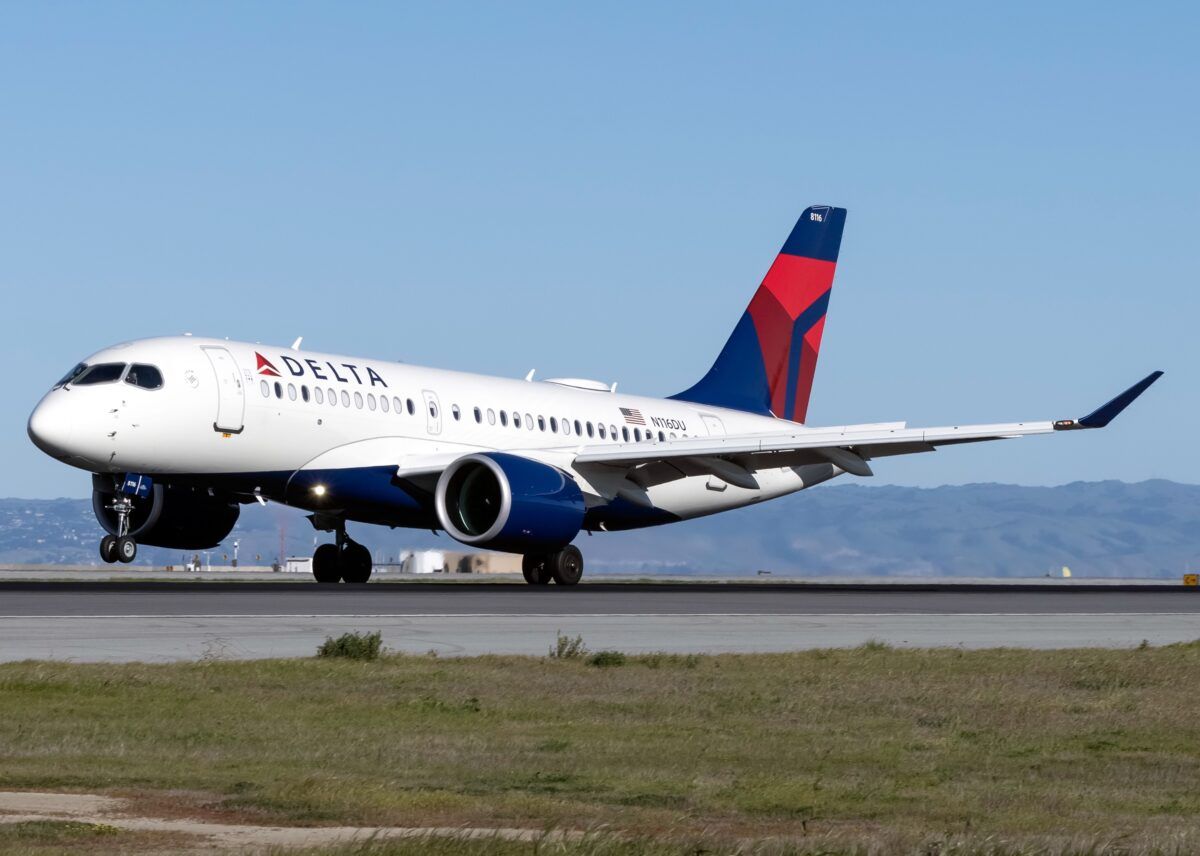 Since its launch, the A220 has been popular – a new aircraft bridging the gap between smaller regional aircraft and larger narrowbodies. But this is even more obvious in the current slowdown. It has seen fast utilization recovery and, with reduced demand ongoing, this is likely to continue. Combined with its efficiency and improved capabilities over smaller regional jets, the Airbus A220 looks set to be a post-pandemic winner.

The A220, of course, started life with Bombardier as the CSeries. The Canadian manufacturer began work on the program in the early 2000s as a replacement for aging competitor aircraft, including the MD-80, Fokker 100, and older 737s. The new aircraft would target lower capacity and aim for more efficient operations.

Orders were placed by several airlines, and the CSeries entered service in July 2016. Bombardier, though, experienced problems. There were delays with the engines, marketing difficulties, and ballooning costs that had risen to $5.5 billion.

The solution was a partnership with Airbus. It took a 51% stake in the CSeries program in July 2018. This has since been increased to 75%, as Bombardier exited the program (with the remainder held by the Government of Quebec).

The A220 – a new direction for Airbus

The acquisition by Airbus served several purposes. Firstly, it provided a way for a large order from Delta Air Lines to go ahead. Boeing had objected to this, and Bombardier was facing problems with imposed tariffs. The Airbus deal gave it a US manufacturing location to avoid this.

But the deal was not just a move to get around tariffs. Airbus had already expressed interest in the 100-150 seat market and already had the lower capacity A318 and A319.

This is a market that Boeing had limited exposure to (it rebranded the MD-95 as the Boeing 717, but this was long out of production). The move marked an unusual but welcome shift in the Boeing vs. Airbus battle. At the time of the deal, Airbus predicted sector demand of 6,000 new aircraft over the next 20 years.

Popular even before COVID

Concentrating production facilities in North America is no coincidence. Airbus expects the biggest demand to come from airlines in this region. And with large orders from JetBlue, Delta, and Breeze, it seems to be on the money so far. Even long-time Boeing airline Southwest may be interested in the A220 as a replacement for its aging 737-700 fleet.

But it has also been popular in Europe. Air France-KLM has the largest European order, with an initial commitment for 60 aircraft with 60 more options. airBaltic is a major customer, and remains the world’s only all-A220 airline.

Rebounding after the pandemic

Many airlines grounded large parts of their fleets in 2020. Larger aircraft fared worse with this; almost every operator has, for a time, grounded the A380, for example.

Smaller aircraft, and the A220, were of course, not exempt, with less flying grounding parts of fleets. The difference with the A220 was how quickly it came back into service.

Even in May, with many flights grounded, it was still surprisingly active. In August 2020, Simple Flying called it the world’s most active aircraft, with an impressive 93.75% of the global fleet operational.

To see this best, take a look at the data from RadarBox.com. The chart below shows how quickly global utilization of the A220 recovered in 2020. Usage fell dramatically in February (although daily operational aircraft never fell below 35). By July, numbers in use had almost returned to normal.

Comparing this with the A380 or 747 would be unfair and a bit shocking! Instead, take a look at how the A320 family fared over a similar period. The chart below shows the much slower recovery of the fleet.

This success comes down to two main factors – its smaller size and its efficient performance.

Size – between regional and narrowbody

The A220 was designed to be smaller than the mainstream narrowbody range. There was seen to be a market for that when it was developed, and this has become a key benefit during the pandemic-induced slowdown.

With lower passenger numbers, it makes sense that airlines will operate smaller aircraft if they have the choice. The economics of operating higher capacity aircraft works when you have more passengers (lowering cost per seat) but fall apart with low volumes. Switching aircraft, where fleet and routes allow, makes sense.

We saw this extensively in 2020. For example, although SWISS operated few flights in May last year, the A220 operated 83% of them.

airBaltic’s CEO Martin Gauss explained this in an interview with CAPA in late 2020. He said,

“If you have very, very high passenger numbers on a city pair, you would rather have 239 seater aircraft, because then your cost per seat goes down. But right now, we don’t see that. And I think for quite a while, these very high passenger numbers on point to point are not there, and therefore I’d rather go with 145 seater. I’m very happy having a business class and an ultra-low-cost economy combined in one aircraft.”

The second factor that has pushed the A220 back into the air is its efficiency. It offers up to 20% lower fuel burn than similar aircraft. This has always been marketed as a key advantage, but, again, it becomes more significant when airlines have a choice of which parts of the fleet to operate. It makes sense to ground the less efficient aircraft when not all are needed.

Mr. Gauss highlighted this efficiency in an interview with Simple Flying as being better than the airline expected.

Coupled with this, the A220 is also a young aircraft. The oldest models of the type have been in service for less than five years. This helps efficiency and likely maintenance costs as well, compared to older A320s and 737s.

The importance of this efficiency was highlighted recently when we looked at Southwest Airline’s possible use of the A220. It is deciding between the 737 MAX 7 and the A220-300 as a replacement for its again 737-700 fleet. While the MAX 7 comes out slightly ahead for capacity and range, the A220 could end up 7% more efficient overall. That may be enough to persuade the airline to move away from the all-737 fleet – a huge win for the A220.

Looking forward, the recovery seen by the A220 is not just an isolated event. It will take time for passenger numbers to recover, and while they do, it will keep its edge.

But, the A220 offers other advantages too. The trend of passengers looking for convenient flights is likely to continue, so smaller aircraft offering more flexible schedules will do better.

Point to point flights are also likely to be more popular than connecting flights – both for convenience and to minimize ‘risky’ connection in foreign countries. The A220 offers a lot here. With a range of 5,920 kilometers (for the A220-300), it is capable of almost six hours of direct flight (airBaltic fly Riga to Abu Dhabi in five hours 50 minutes).

And to add to this, the growing importance of efficiency and emissions in the public eye is sure to benefit the A220.

It is already winning against Airbus’ smaller A320 family members with its clean-sheet design and focus on efficiency (plus a lower price tag). With the 717 long out of production, Boeing does not compete. Embraer, and other regional manufacturers, of course, do, with the E-Jet family offering continued strong competition.

Aegean Airlines moves into a new home at Manchester Airport