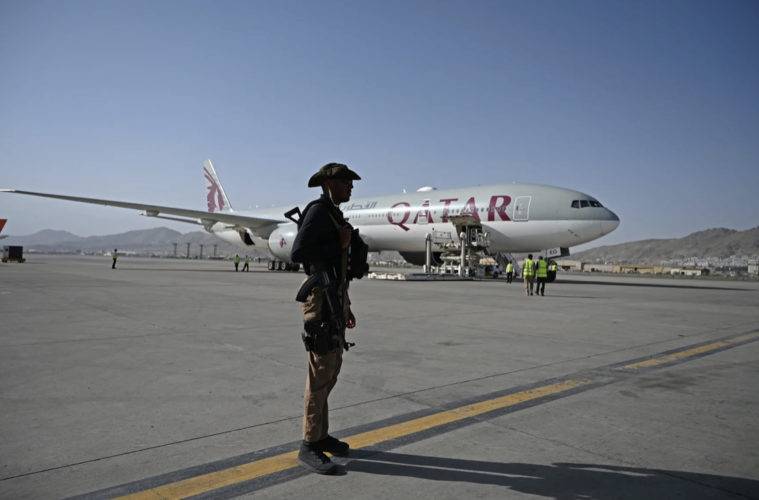 A Qatar Airways B777-300/ER (Registration A7-BEO) had arrived in Kabul earlier today carrying aid. It departed from Kabul for Doha, Qatar with passengers, including a large group of foreigners on board.

As the last plane carrying the US soldiers left Kabul on August 31, the US barred all civil aircraft from flying over the Afghanistan air corridor without prior authorization unless permitted.

“Due to both the lack of air traffic services and a functional civil aviation authority in Afghanistan, as well as ongoing security concerns, US civil operators, pilots, and U.S.-registered civil aircraft are prohibited from operating at any altitude over much of Afghanistan.”

As the airport was left non-operational after the US pullout, the Taliban sought technical help from Qatar, which emerged as a key player post the US-led evacuation efforts.

Kabul Airport Operations is Getting Restored

Qatari and Turkish technical teams have helped restore operations at the airport, which was damaged during the chaotic evacuations of tens of thousands of people to meet the US troop withdrawal deadline of August 31.

“This is a historic day in the history of Afghanistan as Kabul airport is fully operational. We have been faced by huge challenges … but we can now say that the airport is fit for navigation,” he said.

Al-Qahtani earlier said the Qatar Airways plane would be the first international commercial flight from Kabul airport since American forces left at the end of August.

“Call it what you want, a charter or a commercial flight, everyone has tickets and boarding passes,” al-Qahtani said from the tarmac, adding that another flight would take off on Friday. “Hopefully, life is becoming normal in Afghanistan.”

Alex Macheras, the aviation analyst, told Al Jazeera that it was a charter flight.

“This is not a commercial flight whereby the airline is selling tickets to paying passengers … as part of a schedule,” he said,

“Instead the airline has been paid by the government, which in coordination with other governments, offers almost rescue tickets if you like, to those who are stuck by operating individual, one-off special, charter flights. We see this all around the world when there is bad weather in places, when airlines go bust, and so on.”