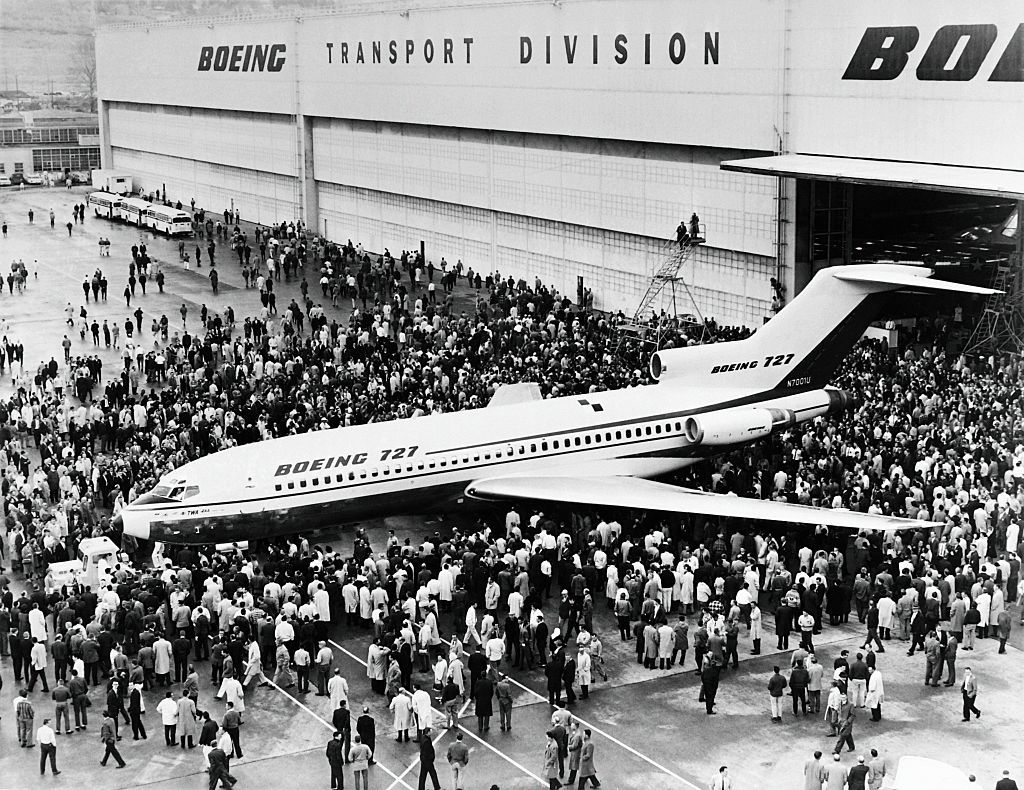 Having launched the four-engine 707 in the late-1950s, Boeing had to consider what aircraft it might produce for shorter flights to and from smaller airports. Airlines had different demands, with some wanting proven four-engine jets while others preferred the idea of twin-engine aircraft. Let’s have a look at how the 727 came about and why Boeing decided to build it.

What inspired Boeing to build the 727?

The inspiration behind the Boeing 727 was the aim to create an aircraft that could access smaller airports. After all, short runways were not suitable for Boeing’s larger 707 design. The new plane needed to be able to descend quickly into airports while avoiding obstacles such as buildings in the vicinity of the runway. To achieve this, Boeing developed a large and sophisticated flap system, which provided extra lift at low speeds.

In another first, the 727 also featured a small gas-turbine engine auxiliary power unit (APU). This innovation eliminated the need for a ground power supply to start the engines. It also turned out to be a big selling point for airlines operating in developing countries.

As Boeing began to recognize the aircraft’s potential in the late 1950s, its rival, Douglas, was working on the DC-9. Meanwhile, over in Europe, the British Aircraft Corporation was also designing the BAC 1-11 around this time.

Boeing knew that it needed to sell a minimum of 200 aircraft to make the 727 a success. However, by December 1960, it had received orders for just 40 aircraft from Eastern Airlines and United. Even by the time the aircraft made its first test flight in 1963, orders were still well-below the break-even point.

In an attempt to drum up business, Boeing sent the 727 on a tour of 26 counties, in which the aircraft clocked up an impressive 76,000 miles (122,310 km). Ultimately, the gamble paid off, and, as we shall see, Boeing far surpassed its original target.

The 727 first flew commercially with Eastern Airlines in 1964. However, the following year, tragedy plagued the new aircraft. By November 1965, Boeing had witnessed three of its 727-100 aircraft crash within three months. These accidents resulted in 131 fatalities. Investigators looking into the crashes discovered that some pilots did not fully understand the flap system. As such, they were reportedly allowing the planes to descend at too great a speed.

Despite calls from politicians to ground the 727, Boeing and the flight safety board were adamant that nothing was wrong with the plane. However, the authorities did declare that 727 pilots needed more training and that Boeing should modify the flight manual procedures regarding the final approach. Despite reassurances that it was a safe aircraft to fly in, the aircraft fell out of favor among passengers around six months, until confidence in the aircraft returned.

Boeing’s original production run was for 250 aircraft, but the larger 189-seat 727-200 proved vastly more popular than expected. In total, across all 727 varieties, Boeing built and delivered 1,832 of the trijets, far surpassing its original target. After 22 years in production, FedEx received the final Boeing 727, a 727-200F, in September 1984.

By 2003 nearly all airlines had retired the loud, thirsty planes in favor of quieter, more fuel-efficient aircraft like the 737 and larger 757. Its last commercial flight took place in January 2019.  Despite its accident-plagued early years, the 727 ended up being one of Boeing’s (and the world’s) best-selling airliner families. The US manufacturer will hope that a similar turnaround and redemption can happen for its recently-recertified 737 MAX.