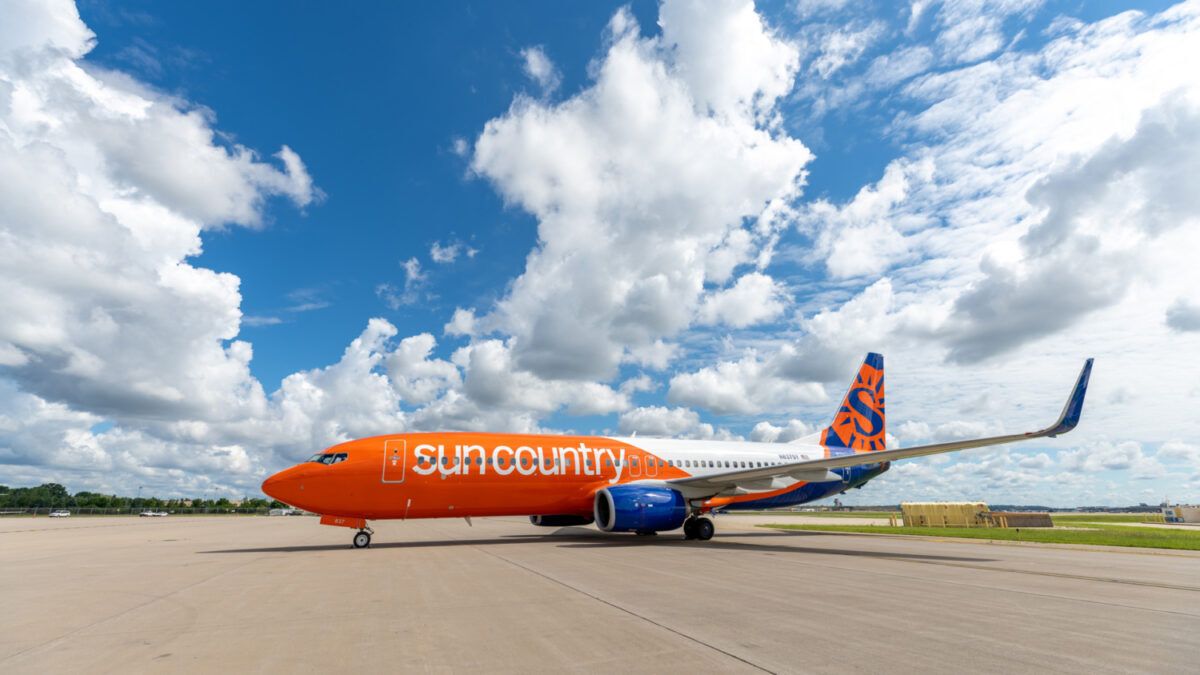 Sun Country Airlines is an American low-cost carrier that often flies under the radar of most travelers. Based out of Minneapolis, Minnesota, the carrier focuses on flying leisure passengers on nonstop routes on mostly seasonal services. As the airline charts a course to get to 50 aircraft, the carrier has plenty of room to grow. Here are some examples.

Sun Country wants to get to 50 jets

Before delving into where Sun Country could go, it is important to recognize where the airline is right now. The airline has a fleet of 43 aircraft, including 31 passenger and 12 cargo aircraft. The carrier’s 31 passenger jets are comprised of one Boeing 737-700 and 30 Boeing 737-800s. 50 is the magic number Sun Country is hoping to get to by the end of 2023.

The Boeing 737-800s recently underwent a cabin densification process that brought its planes to 186 seat-configurations. These aircraft are the ones that do a lot of Sun Country’s heavy lifting of operations.

Sun Country prefers to take the Allegiant model by acquiring mid-life aircraft. The aircraft it primarily wants to take are the Boeing 737-800s since they have higher capacity and are incredibly versatile. By acquiring mid-life 737-800s, Sun Country can reach a lower unit cost at lower levels of utilization. So, when it can generate higher revenue using the planes during the peak season and park them during times of lower demand without burdening the airline with lease or finance costs on expensive new jets.

With this model, Sun Country does not maintain a large order backlog. Instead, it seeks out the best opportunities through which it can take on a used aircraft at the right price. Right now is a great time for an airline to consider taking on a used jet as other airlines cut their leases and retire some jets, so there are plenty of models out there that Sun Country could easily acquire.

Sun Country can touch over 300 airports in a year, given its extensive cargo and charter operations. However, its scheduled services serve far fewer airports, mainly because charter operations lead it to serve some airports near and far that would otherwise not warrant regularly scheduled commercial services.

As you can see, the biggest cities in terms of the number of destinations served for Sun Country are Minneapolis/St. Paul and Dallas/Ft. Worth.

In terms of its reach, the airline has an impressive array of routes going as far south as Costa Rica and Aruba and as far north as Alaska. Internationally, Mexico is one of Sun Country’s largest markets.

More routes out of Minneapolis

There are over 250 market opportunities that Sun Country thinks it can serve profitably with its low-cost structure. Sun Country wants to target leisure travelers. There are a few buckets where this service could work out.

For winter travelers, skiing and snowboarding are some of the best outdoor activities. There is a lot of seasonal demand for flights to top ski destinations in Colorado, like Aspen, where Sun Country could serve a few months a year a few times per week. Colorado has a lot of ski towns with easy airport access, such as Vail or Montrose.

Sun Country has shown it thinks leisure ski travel is something it can target as it recently announced new flights to Jackson Hole in Wyoming and has seasonal service to Bozeman, Montana.

A hub airport that Sun Country currently does not serve that would also fit the ski travel bill would be Salt Lake City, which is another Delta Air Lines hub.

When the ski season becomes quiet during the summer, there is a lot of room for Sun Country to point its planes to the Caribbean. The airline already flies to San Juan, Punta Cana, and Jamaica from Minneapolis, so added flights to destinations like Nassau or Santo Domingo are not necessarily out of the question.

Additional flights could include major cities with limited competition out of Minneapolis, such as Cleveland, Pittsburgh, Atlanta, Charlotte, Sacramento, and many others. These are all locations where Sun Country could come in a few times a week at a lower cost than Delta or another major US carrier and pull it off.

Taking a stand outside of MSP

Dallas is another major airport for Sun Country, from which it flies to several points in Central America and the Caribbean and also out to California and Nevada. Sun Country sees the opportunity to grow five to eight aircraft worth of opportunities by the end of 2023 outside of Minneapolis.

Dallas fits the bill of a traditional Sun Country base. The airport, a massive legacy American Airlines hub, could benefit from additional low-cost competition. While Spirit has been working to build up out of Dallas, there could be some more room for Sun Country to hop in on some seasonal routes.

Dallas could see expanded service to existing Sun Country destinations where there is high demand and limited competition. This includes routes to places like Jackson Hole, Palm Springs, and Orange County. All of these are mostly leisure routes with a seasonal bend.

Sun Country does not currently operate regularly scheduled commercial flights between Dallas and Florida. Given how many people have taken a liking to domestic beaches in Florida, Sun Country could end up routing a plane from Dallas to destinations like Fort Myers, Tampa, Orlando, and more.

Another non-MSP location that could see expanded growth would be Las Vegas. As a mostly tourist and leisure destination, Sun Country has a relatively small presence there that it could grow. Still, the competition will be pretty intense as Southwest, Allegiant, Frontier, and Spirit, all low-cost carriers, have a significant presence there.

Some key markets out of Las Vegas could easily include some legacy Sun Country destinations like Austin or Nashville. Going a little riskier in new destinations, the airline could target flights to the East Coast like Baltimore, Boston, or Newark. Philadelphia could also be an option.

Again, nearly all of these routes have a mostly seasonal bend, and Sun Country could easily come in a few times a week into an underserved market and make a profit. Time will tell where it grows, but the airline has room to add more leisure destinations as it sees fit.

Viva Aerobus surpassed its monthly passenger record for the second time in a row in June after reaching 1.36 million reg …