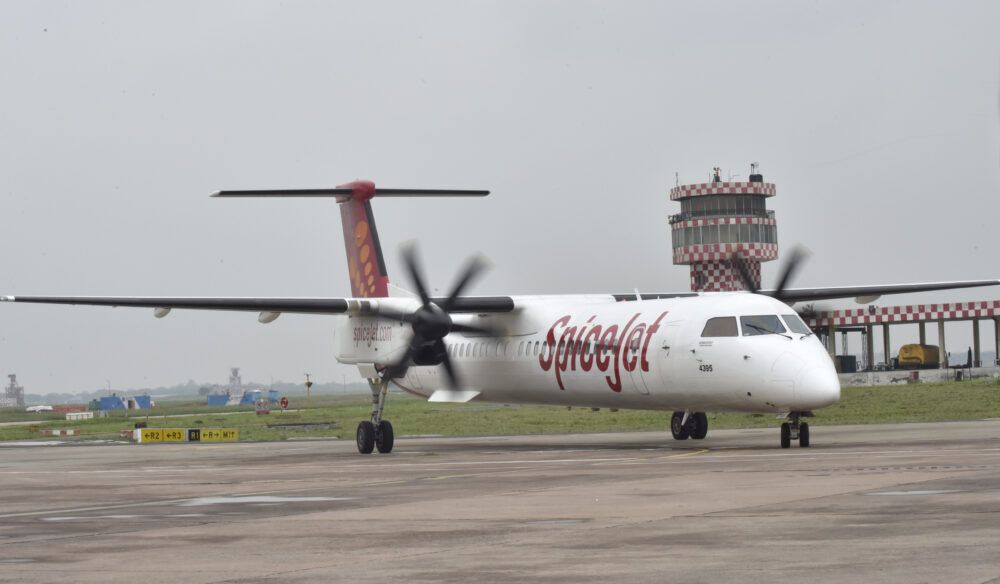 A passenger on a SpiceJet flight from Delhi to Varanasi had to be subdued after he tried to open the emergency exit door during the flight. The passenger was subdued and restrained for the remainder of the one-hour and 45-minute flight. The aircraft landed safely and the passenger was handed over to the authorities.

According to Times Now, the incident occurred on a flight from Delhi to Varanasi on Saturday, 27th March. The routine Q400 flight quickly turned into a nightmare for passengers after a passenger, named Gaurav, started roaming around the aircraft soon after takeoff.

He then suddenly tried to open the emergency exit door, causing an alarm in the cabin. The crew and co-passengers quickly reacted and pulled the hostile traveler away from the door and restrained him for the remainder of the flight. It’s unclear which door the passenger tried to open, although there is an emergency exit right across seat 1C, where he was seated.

No further incident occurred once the passenger was restrained to his seat, allowing the flight to continue to Varanasi. The flight left Delhi on time at 14:05 local time and arrived in Varanasi slightly early at 15:47, possibly due to the request for priority landing.

On the ground, the unruly passenger was handed over to the Central Industrial Security Force (operators of airport security) before transferring him to the local police station. The behavior could lead to criminal charges, which we will know more about soon.

In a statement about the incident, a SpiceJet spokesperson said,

“Immediately, the female crew stopped the passenger with the help of co-passengers and restrained him till the flight landed safely at Varanasi airport. The crew immediately informed the captain who requested the Air Traffic Control (ATC) for a priority landing.”

Can a door open midflight?

While the passengers and crew reacted quickly to this incident, it is impossible for a passenger to open an emergency exit mid-flight. The aircraft’s cabin pressure means that the door becomes extremely heavy, with thousands of pounds of pressure on the door. Once at cruising altitude, the door cannot be opened by any passenger due to the sheer weight of the pressure.

According to Ask The Pilot, emergency exit doors also have a series of electrical or mechanical latches to prevent an opening mid-flight. These physical safeguards ensure that even at low pressures the door cannot be opened. The only real risk of a passenger opening the door is while the aircraft is still on the ground.

While on the ground, taxing, or taking off, the doors could be opened by any passenger. Moreover, since the emergency slide might be active, the crew are vigilant to ensure nobody is planning to leave the aircraft early. Overall, the fast reaction of crew and co-passengers is to prevent damage and subdue a hostile passenger rather than risk the door opening.