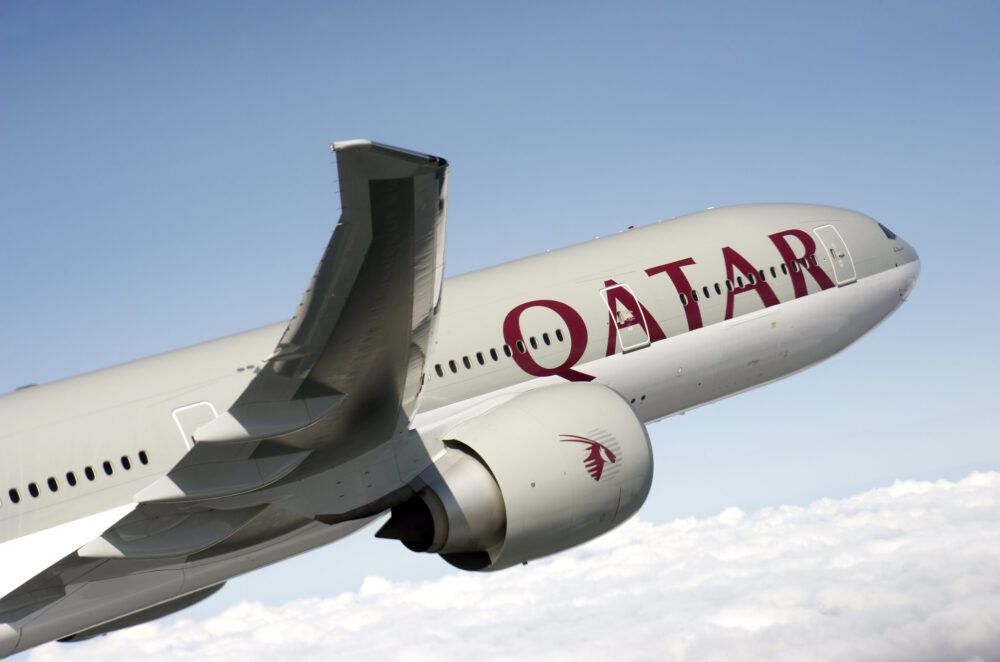 A Qatar Airways Boeing 777-300 returned to Doha on Wednesday after suffering tire damage on departure. The plane had flown over 2,000 kilometers when the pilots made the decision to head back. The aircraft landed safely around five and a half hours after departing.

Simon Hradecky first reported the incident in The Aviation Herald. In that report, it is noted the pilots heard an unusual noise during departure. But as no abnormal tire pressure indicators showed up, the pilots decided to keep flying. It was only later, during a runway inspection, that tire debris was discovered.

The Boeing 777-300, registered as A7-BAE, had been deployed to operate flight QR832 across to Bangkok. That’s Qatar Airways’ semi-regular service between Doha’s Hamad Airport and Bangkok’s Suvarnabhumi Airport. On Wednesday, the aircraft pushed back at 13:37 (local time) for the six-and-a-half-hour flight to Bangkok.

According to The Aviation Herald, the pilots heard a noise “similar to the impact onto the lower fuselage when departing.”  The pilots thought it might be a bird strike or a nose wheel tire bursting. But with no alerts in the cockpit, the pilots continued the flight.

A subsequent runway inspection found tire debris. The pilots were notified. At this point, the plane had crossed into India and cruising at 37,000 feet just north of the Gulf of Kutch. The Boeing 777-300 had been in the air for nearly two and a half hours. The pilots decided to head back to Doha, tracking along the Gulf of Oman’s northern edge, over the UAE, and into Qatar.

The first recorded incident for Qatar Airways this year

A7-BAE has flown with Qatar Airways since March 2009. It is one of the older Boeing 777s in Qatar Airway’s fleet of 80 plus 777s. This is the second recorded incident involving A7-BAE. In 2020, The Aviation Herald reports the aircraft flew from Tokyo Narita to Osaka’s Kansai Airport in August 2010. On approach, A7-BAE headed towards a closed runway. The pilots aborted the landing at just 780 feet. The flight went around and shortly after lined up to land safely on the correct runway. However, the incident was serious enough for an investigation to be launched.

Yesterday’s incident was the first recorded incident among the 233 strong Qatar Airways fleet this year. Like every other airline of comparable size, Qatar Airways’ aircraft are involved in a handful of incidents every year.

A handful of incidents for Qatar Airways in 2020

Last year, Qatar Airways recorded six incidents. Some were relatively minor, like a hydraulic fluid leak on a Boeing 787-8 freighter at Doha in September and an A380 operating out of Melbourne, Australia, that could not retract its landing gear.

There were also two instances of bird strikes in 2020. The first was in March when a Boeing 777-200 on approach to Los Angeles ingested one or more birds. Just six weeks later, the second birdstrike incident occurred when a Qatar Airways 777-300 was on approach to Tunis.

Potentially more uncomfortable for passengers was a loss of cabin pressure in February on an A330-200 flight from Sialkot, Pakistan, to Doha. Towards the end of 2020, a Qatar Airways A380 heading towards Johannesburg with 526 people onboard encountered severe turbulence over Mozambique, seriously injuring one passenger.

Meanwhile, at the time of publication and 12 hours after landing back in Doha, A7-BAE remains on the ground there.