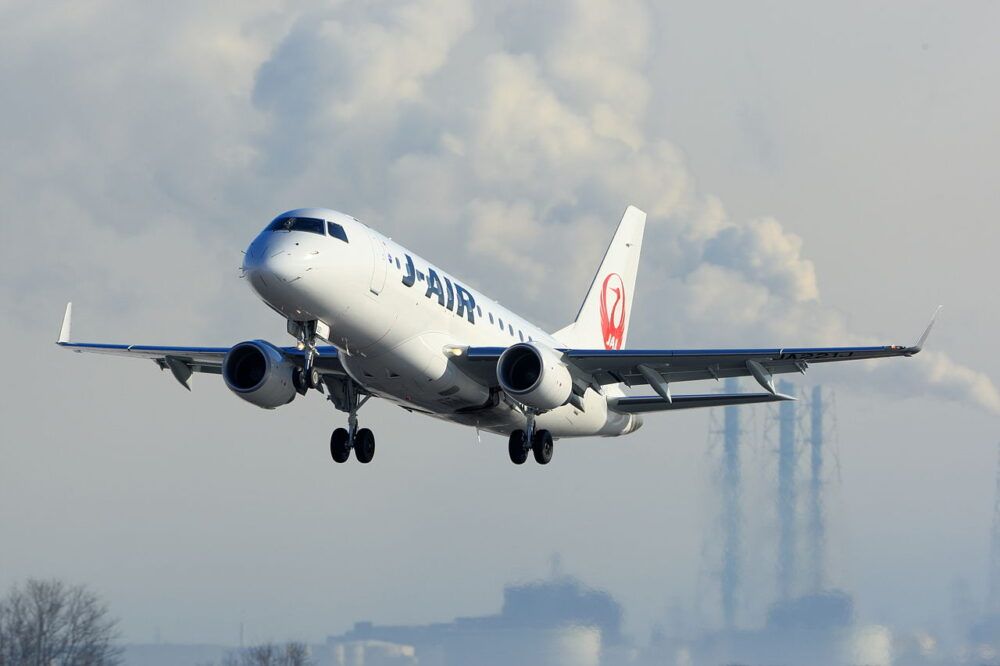 Similar to British Airways having its BA CityFlyer brand and KLM operating KLM CityHopper, Japan Airlines has a regional brand by the name of J-AIR. This regional subsidiary, wholly owned by the JAL Group and affiliate oneworld alliance member, has been operating since 1996. Let’s find out more about this Japanese, all-Embraer airline brand.

J-AIR’s fleet actually began with the small 19-seat JS31. However, the airline moved up to a small number of Bombardier CRJ-100s shortly after. Its current all-Embraer fleet began to take shape in 2007 when the airline announced that it would be ordering 10 E170 jets. The small twinjet aircraft was configured to accommodate 76 passengers in a single-class layout.

According to Embraer, the E190 was the first J-Air aircraft to feature JAL’s new Sky Next cabin. Introduced in 2014, JAL launched an initiative to upgrade aircraft interiors across the fleet.  Enhancements included new premium cabin seats, genuine leather upholstery, and charging ports for devices.

While the airline’s E170s continue to be configured as a single-class, all-economy layout, its larger E190s have 15 business class seats and 80 in economy class.

According to data from Planespotters.net, J-AIR currently has 18 E170s in its fleet at an average age of 9.1 years old. With an average age of just 3.7 years, J-AIR has a total of 14 E190s. One of these is currently is listed as parked while all other aircraft are active.

“J-AIR’s combination of E170s and E190s in its fleet has enabled the airline to sustainably develop new routes and offer better customer convenience and comfort to their customers. We are proud to see how the E-Jets add value to JAL’s fleet strategy and we will continue to work hard to exceed their expectations.”

According to J-AIR’s website, it has a total of 26 destinations scattered all over Japan. Its larger destinations include Tokyo Haneda, Osaka Itami (its main hub), and Sapporo Chitose.

The Mitsubishi SpaceJet on order

In 2015, its parent company, Japan Airlines (JAL), signed an agreement for the purchase of 32 firm Mitsubishi SpaceJets (named Mitsubishi Regional Jets at the time). All jets would have been operated by J-AIR.

Deliveries were originally scheduled to commence in 2021, but the program is faced a number of setbacks, and development is currently paused indefinitely.