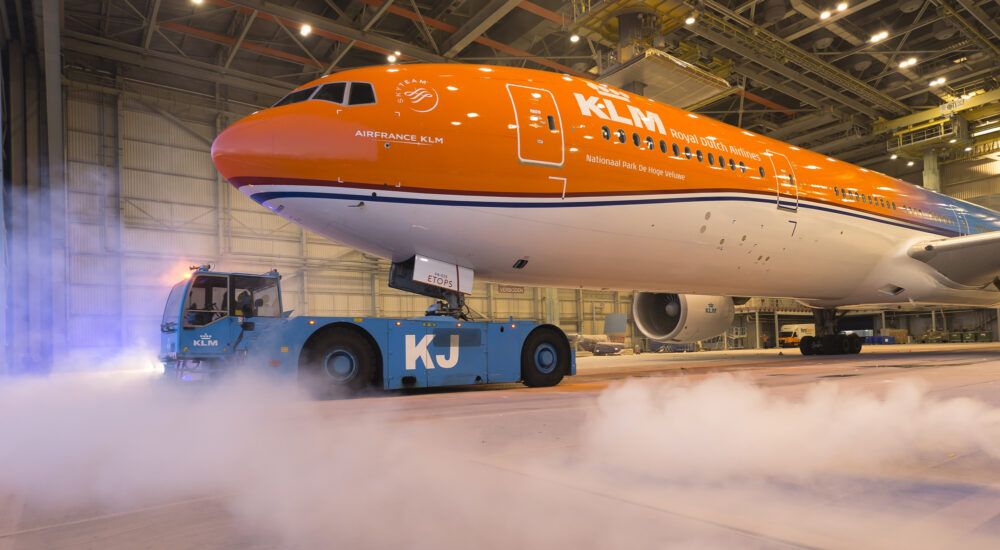 KLM’s Boeing 777 wearing the striking ‘Orange Pride’ livery has been on the ground in Beijing for more than two weeks. This followed an engine issue, which forced a diversion on New Year’s Eve. KLM engineers are unable to undertake the engine replacement in China due to travel restrictions, so for now, she remains stranded.

KLM’s famously uniquely liveried Boeing 777, a color scheme called ‘Orange Pride,’ was noted to have taken a diversion during a routine flight between Shanghai and Amsterdam on New Year’s Eve. The aircraft, registered PH-BVA, was overflying the southeast of Russia on its way home when the crew encountered an issue with the left engine.

While the issue was significant enough to warrant a diversion, it appears not to have been a major incident at the time, as the pilot elected to about turn and fly back to Beijing rather than landing in Russia. The 777 can fly adequately on a single-engine for some time and landed safely in Beijing three and a half hours after instigating the diversion.

At the time, it was noted that after landing, maintenance found metallic chips in the engine’s magnetic chip detector. This indicates a significant issue, requiring a replacement engine to be installed. Usually, this is not a major disruption, with replacement engines able to be ferried out in a matter of days.

However, flight tracking does not show PH-BVA as having left Beijing yet. Now, with more than two weeks of having this 777-300ER out of service, why isn’t it back in the Netherlands yet?

Orange Pride is taking some time to repair

This should mean that the repatriation of Orange Pride should have happened by now. Virgin Atlantic’s blog states that, from start to finish, replacing a jet engine can take up to 24 hours. Even if that was split over daylight hours only, a maximum of three days would have been required to complete the work.

However, there are more factors at play here – namely, a pandemic. Because of the strict entry restrictions in China, KLM’s technicians were not able to travel along with the replacement engine to fit it to the plane. Had they done so, they would have been required to spend 10 days in quarantine before being able to start work.

For this reason, KLM has been forced to contract the job to a local provider. The airline told Simple Flying,

“The plane (PH-BVA) in question is still in China and will need a new engine. Various options were considered for carrying out the engine change. It was decided to enter into a contract with a local authorised provider. This is a certified company (with a hangar) that is supported by our local KLM E&M technical staff and also receives support from our KLM E&M experts from Schiphol.”

At the present time, it is not known when the repairs will be completed or when Orange Pride will make its way back to the Netherlands.