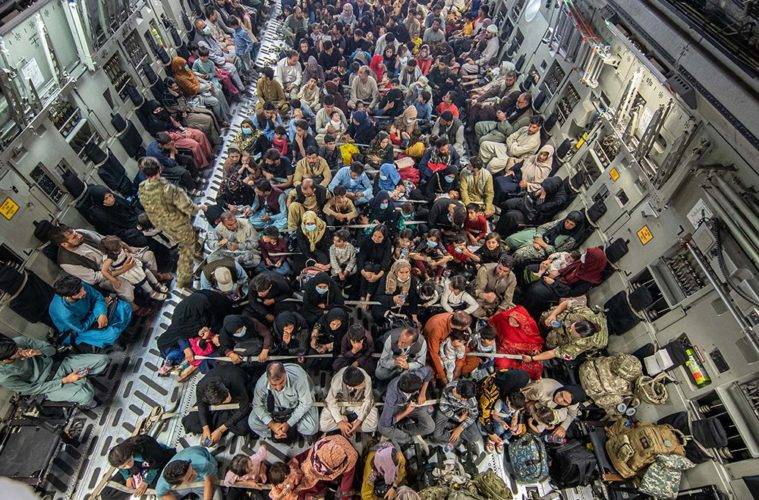 Since the fall of Kabul, Afghanistan to the Taliban forces on 15th August, the world has joined together to rescue their nationals and Afghans. We have compiled a list of ten countries that are flying day and night, in very difficult conditions, to rescue as many people as possible.

Please note the below list of countries is not complete or exhaustive. There are some countries we did not cover in this post. (The Netherlands, Czech Republic, Denmark etc)

“The Globemaster’s are currently being reconfigured to carry the maximum number of people as safely as possible, and Canadian Armed Forces personnel are empowered to make decisions on the ground in the interest of saving human lives.”

On 18th August the first of three Afghanistan evacuee flights, on behalf of the German government, arrived at Frankfurt with 130 people.

The Airbus A340-300 from Lufthansa picked up passengers who had been taken by the German air force from the Afghan capital of Kabul to the Uzbek capital of Tashkent. Further special flights from Tashkent, Doha and other neighbouring nations are due to be used for evacuation purposes in the next few days.

Also, German Joint Forces are performing rescue flights using the A400; as of yesterday 11 flights had been performed, with 1640 people on board in total.

Pakistan International Airlines was the only commercial airline continuing to fly to Kabul, after all the others had pulled out by 16th August.

However after multiple flights and evacuating about 2000 people from Kabul, including journalists, diplomats and staff of the IMF/World Bank, PIA decided to suspend operations, due to unsafe tarmac and taxiways, debris and lack of relevant airport staff and facilities for flight operations.

On Friday 20th, PIA operated two flights using an A320 and a Boeing 777. The CEO of PIA, Arshad Malik, personally flew to Kabul to assess the situation.

The US is by far the country that is performing the most rescue flights, with multiple flights being made daily. President Joe Biden said on Friday that the US has evacuated approximately 13.000 people since last weekend and 18.000 since July.

On 15th August, the USA Air Force transported 823 Afghan citizens from Hamid Karzi International Airport. A new record for the C-17 Globemaster. The original count of 640 was including only adults, 183 children were also onboard.

On Friday, CNN International Correspondent Clarissa Ward shared details of her flight out of Kabul onboard a C-17. The flight departed for Doha, with nearly 300 Afghans and US nationals onboard.

Yesterday an Afghan mother delivered a baby girl just after touching down at Ramstein Air Base in Germany. The mother started having complications, while the aircraft was at its flight altitude, due to the lower cabin pressure in the plane.

“The aircraft commander decided to descend in altitude to increase air pressure in the aircraft, which helped stabilize and save the mother’s life.”

On 21st August, National Airlines A330-200 (Flight Number NCR420, Registration N819CA) was the first US commercial carrier to airlift Afghan evacuees to the US. The aircraft, with 270 passengers, landed at Washington Dulles Airport on Saturday around 13:20.

The journey of 6,942 miles was covered in 14 hours and 37 mins from Al Udeid Air Force Base in Qatar, with a technical stop In Sofia, Bulgaria.

National Airlines is the first US commercial carrier to airlift Afghan evacuees to the US. The company A330 aircraft arrived at Washington Dulles Airport today. A mobile lounge unit is being used to disembark all passengers onboard.

Today the Defence Secretary Lloyd Austin has ordered the Civil Reserve Air Fleet to activate, requesting 18 aircraft from various US airlines, to help with the evacuation of Afghans and Americans. It’s only the third time in history that the US airlines have been mobilized by the military.

American Airlines, Atlas Air, Omni Air and Delta are to provide three aircraft each, Hawaiian Airlines must provide two aircraft and United Airlines will provide four planes. These aircraft will not be flying into Kabul, they will be used for picking up passengers from staging bases in the Middle East and flying them to the US or other locations.

Up to today, 378 people have arrived at Torrejón airbase, close to Madrid, in six aircraft. Last night two A400M’s left Kabul for Dubai with 177 persons onboard, 110 of which are Afghan collaborators from Spain and the remaining 67 from the United States.

The French Air Force A400M performed a new evacuation on Saturday 21st. As the aircraft took off from Al Dhafra Air Base, it fired anti-missile flares; it is still unknown why. Since Monday more than 570 people have been evacuated from Kabul onboard A400M and C130 aircraft supplied by the French army.

France is also using the Airbus A330 Multi Role Tanker Transport (MRTT) to fly people for the second journey from UAE to Paris, they have made five flights in the last five days.

According to IndiaToday, the country has been allowed to operate two flights per day to evacuate its citizens from Kabul.

As of today, India has brought back close to 400 people on three flights; the first using an IAF C-17, from Kabul to Hindon airbase close to Delhi, with 168 people onboard. Another group of 87 Indians and two Nepalese nationals were also flown in a special Air India flight from Dushanbe.

The Royal Australian Air Force is using both the C-130 and the C-17 to take Australian citizens, and Australian visa holders, out of Kabul. Most of these rescue flights are destined to the Al Minhad Air Force Base in the UAE. From there a chartered Hi Fly A340 is to transport them to Australia.

The Belgian Air Force sent two C130s to fly evacuees from Kabul to Islamabad, from there an A330 MRTT has taken the passenger to Europe.

Right now an Air Belgium Airbus A340 is on its way to Islamabad, Pakistan to bring evacuees that were flown from Kabul back to Belgium, on behalf of the Belgium government.

The Royal Air Force deployed a C-17 and an A400M to Kabul, to transport evacuees to the UAE. From there, the A330 MRTT is transporting them to the UK.

Wallace has said that 2,000 Britons and Afghan employees will be called by Britain to leave Afghanistan in the coming days.

Last Monday, 16th August, Turkish Airlines Boeing 777 was the last civilian airplane managed to land in Kabul after being in a holding pattern for almost an hour; amid the chaos at the airport the aircraft took off with 324 passengers onboard.

On 20th August the Indonesia Air Force sent a Boeing 737-400 to evacuate 26 of their citizens, plus five Filipinos and two Afghan nationals, from Kabul via Pakistan.

Indonesian citizens who were evacuated from Kabul, Afghanistan, walk down the stairs from the Indonesian Airforce’s aircraft as they arrive at Halim Perdanakusuma airbase in Jakarta, Indonesia, August 21st 2021, in this photo taken by Antara Foto. Antara Foto/Galih Pradipta/ via REUTERS

Until yesterday the Italian Air Force rescued 1600 Afghans to Rome using a Boeing KC-767A and C-130J.