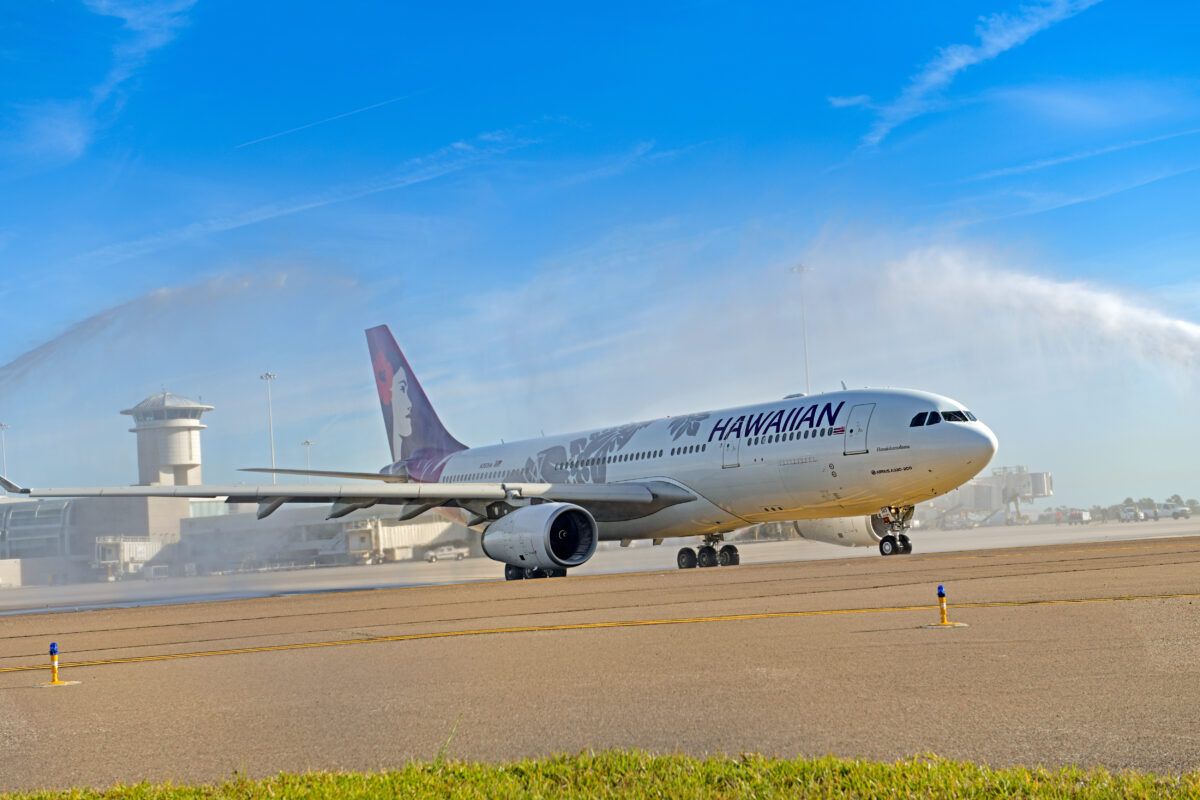 Hawaiian Airlines inaugurated its latest long-haul domestic flight on Friday. The first flights between Orlando and Honolulu onboard a Hawaiian Airlines aircraft launched on Saturday, March 13th. While this inaugural was met with plenty of fanfare and celebration, the airline announced it was not all for show. High customer demand is leading the airline to increase Orlando to Honolulu service to three times per week this summer.

“We are excited to introduce our Florida guests to our award-winning Hawaiian hospitality so they may start their island vacation the moment they step onboard. We are just as pleased to offer Hawai‘i travelers the unmatched convenience of our nonstop service from Honolulu to Orlando, a popular destination for our kama‘āina (residents).”

The new flights from Orlando to Honolulu depart on Tuesdays and Saturdays at 08:15 and arrive at 14:05 in Hawaii; all times are local. From there, passengers can connect onwards on a Hawaiian Airlines intra-island service or otherwise terminate their Honolulu journey. This flight is numbered HA85.

HA86, which operates from Honolulu to Orlando, departs on Thursdays and Sundays at 17:15 local time and arrives in Orlando at 07:00 the next day, local time.

Hawaiian is growing services on this route

The current twice-weekly operation will grow later this year. Starting from June 1st and running through August 10th, the airline will operate between Orlando and Honolulu three times per week. The airline responded that it was doing so after seeing large customer demand for the flights.

This summer, the added flights will depart Orlando for Honolulu on Thursdays and depart Honolulu for Orlando on Tuesdays.

Florida and Hawaii are two highly sought-after tourist destinations. Especially during the pandemic, with most passengers choosing to stay domestic, Hawaii is a fantastic outdoor destination with beaches, resorts, and outdoor excursions, depending on which island passengers choose to visit. For Hawaiians, the new flight allows them to visit Orlando’s theme parks and resorts nonstop.

Hawaiians Orlando to Honolulu flights also allows the carrier to indirectly serve the Tampa-area, which is within driving distance from Orlando, without having to operate two nonstop flights to Hawaii. The large metro area around Orlando and Tampa combined have a population of over five million people, which means a fairly large origination market out of Florida for Hawaiian.

For the next few months, the airline has temporarily suspended services to Australia, New Zealand, American Samoa, and Tahiti. With most of those flights operating on Airbus A330s, the airline now has plenty of spare aircraft. Instead of letting them sit on the ground, the airline is using them to connect new destinations, including Austin in Texas and, of course, Orlando, Florida. Should these flights perform well, then the airline is likely to keep them in the long-run, and Orlando seems to be doing quite well for now.

This is the only nonstop service between Orlando and Hawaii and is one of Hawaiian’s longer domestic routes. However, it is not the longest in Hawaiian’s system.

The airline also operates long-haul routes to New York (JFK) and Boston (BOS), with flights to Boston being the longest regularly scheduled nonstop domestic route. This makes Orlando the airline’s third gateway from the East Coast of the US.