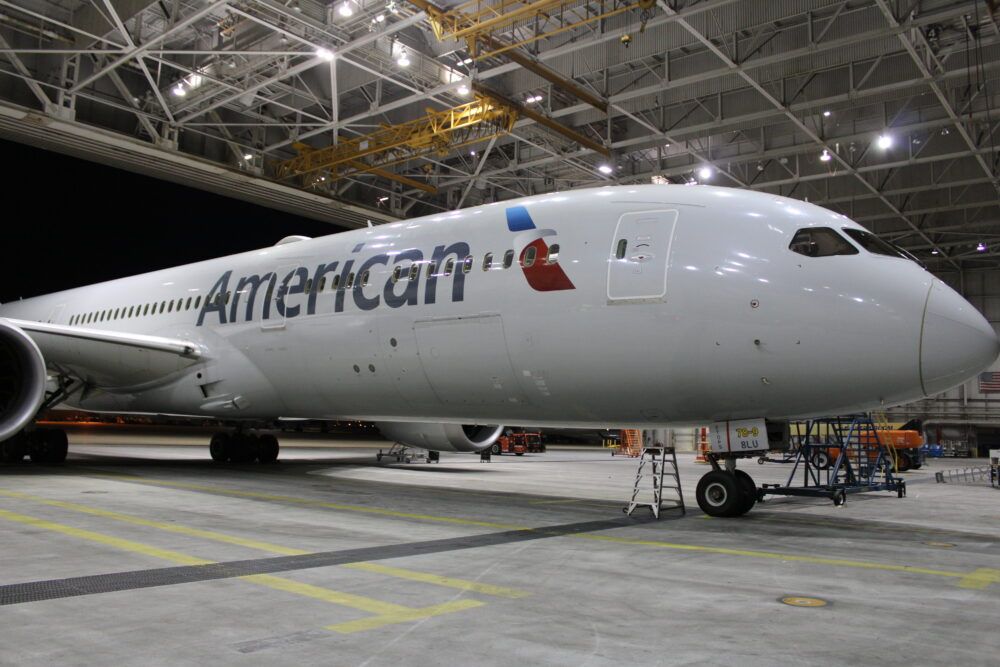 One aircraft that helped usher the world into a new realm of ultra-long-haul flying was the Boeing 787 Dreamliner. The aircraft, which boasts a massive improvement in fuel burn and carbon emissions compared to the older generation of aircraft it replaced and complemented, has helped American Airlines grow its international long-haul route network. All of this started on January 23rd, 2015.

On January 23rd, 2015, American Airlines welcomed its first Boeing 787 Dreamliner. The plane was a 787-8 and is registered as N800AN. At six years old, this jet is still a baby, but it is the oldest Dreamliner in American’s fleet.

At the time of the delivery, the American team was gushing. The airline was waiting for the jets, and, in the aftermath of the merger with US Airways, the carrier was looking to grow its international footprint and deliver cost-savings.

Here is what CEO Doug Parker had to say about the first 787 delivery for the airline back in 2015:

“We are committed to delivering a fantastic product for our customers with the continuation of our unprecedented fleet renewal program and more than $2 billion in improvements in the customer experience. The 787 makes our fleet younger and more modern and it will open up new possibilities to connect our customers to the places they want to fly.”

American Airlines has a fleet currently, of 23 Boeing 787-8s, per data from Planespotters.net. The Boeing 787-8s feature a three-class layout seating a maximum of 234 passengers.

There are 20 lie-flat seats in the airline’s “Flagship Business” class. Just after this is 28 recliner-style seats in premium economy. Lastly, there are 186 economy class seats. This includes 48 extra-legroom seats and 138 standard coach seats.

All seats feature access to in-seat power, on-demand entertainment through the seatback screens, and live television.

The Boeing 787-8 is one of American’s special jets. It is the right size to operate some domestic missions and long-haul international routes where demand would not warrant a larger aircraft. The Dreamliner’s efficiency makes the routes economically viable.

For example, these planes have found their way operating routes from Chicago to London, Los Angeles to Auckland, Chicago to Venice, Dallas to Munich, and more.

These days, the planes are operating some long-haul missions, but they can also be found operating routes where American previously flew narrowbodies. Amid increased demand for routes to Central America and the Caribbean, American has placed the 787-8 into service flying to countries like Haiti, El Salvador, and others.

The 787-8s have helped replace capacity where American Airlines once flew the now-retired Boeing 767-300ERs. Compared to the 767s, the 787s are much better in all cabin classes, with on-demand seatback entertainment at all seats, power, and, for business class customers, a better, more private product.

American Airlines has 22 Boeing 787-9s, per data from Planespotters.net. These planes have 30 seats in Flagship Business, 21 in premium economy, 34 in the extra-legroom economy, and 200 in standard economy.

Simple Flying got an exclusive chance to look inside the Boeing 787-9. For a full cabin tour, check out our post.

The 787-9 has truly transformed American’s operations. The airline did not receive it’s first 787-9 until 2016, but it would be remiss of Simple Flying to ignore the aircraft’s role in American’s fleet.

For example, of Simple Flying’s top six new routes for American Airlines this year, three of the six routes are scheduled to operate using Boeing 787-9s. One of the six is expected to fly with the Boeing 787-8.

American Airlines has plans to fly a Boeing 787-9 from Seattle to Bangalore, India, which will be one of the longest routes in American’s system. The 787-9 will also fly from Dallas to Auckland and Dallas to Tel Aviv.

The 787-9 is the true ultra-long-haul plane in American’s network. Many of American’s longest routes are operated with the 787-9.

First and foremost, while American Airlines does typically fly the 777-300ER on its longest route between Dallas and Hong Kong, those aircraft are configured with a heavy premium cabin. From a revenue perspective, they are better suited to fly to top business destinations and partner hubs.

The Boeing 787-9, without a true international first-class cabin and a sizable economy class cabin, the airline can use these planes on secondary routes where an efficient aircraft is necessary for American, on a rudimentary level, to lower its fares to fill up its planes.

So, this is what makes routes like Dallas to Seoul or Los Angeles to Sydney or Dallas to Shanghai viable routes. It is also what American Airlines hopes will make Seattle to Bangalore work and Dallas to Tel Aviv work.

The transformation of American Airlines

American Airlines has used the Boeing 787 for its fleet transformation. Modernization was important for the airline, as it sought to upgrade the passenger experience and gain a competitive advantage in a cutthroat market.

American has thus far used the Boeing 787-9 to expand its international footprint. However, in the future, the airline will be taking Boeing 787-9s that will replace older Boeing 777-200ER aircraft with much more efficient and comfortable planes. The 787s are also a natural extension of American’s fleet.

The 787s, given how they are also newer, reduce American’s maintenance costs. However, there is still a team of highly dedicated maintenance technicians at American who keep the Dreamliner fleet up and running.

Right now, the 787s can also be found flying on many domestic legs, which should not be surprising. There is more demand for domestic travel as borders remain closed, and the fluidity of the crisis means to travel outside one’s country could leave someone stranded.

The Boeing 787s will fly for many years in American’s fleet. As the oldest is only six years old, these jets could well be operating into the 2030s and beyond. What will replace the marvel of technology that are Dreamliners, however, is anyone’s best guess.