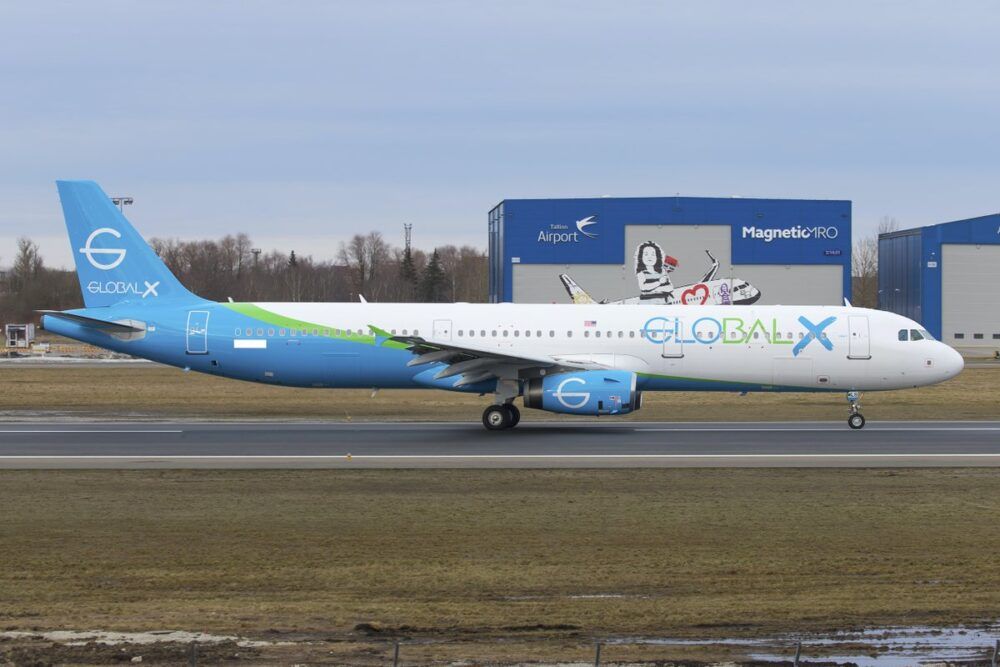 Startup airline GlobalX is gearing up to receive its first Airbus A321. The plane is due to arrive in Miami on April 12. It is another small step forward for the airline. The announcement comes just two months after GlobalX took delivery of its first Airbus.

According to GlobalX’s social media, the airline will take delivery of an Airbus A321-200 in mid-April. That plane’s registration is now N277GX and it is temporarily parked at Erie Municipal Airport in Colorado. In May 2020, Magnetic Leasing took possession of N277GX.

Magnetic Leasing is an aircraft leasing company focusing on mid-life Airbus A320 family and Boeing 737 CL/NG aircraft. Pilots ferried the plane to the United States from Magnetic’s MRO base in Tallinn, Estonia, earlier this month.

Before that, the Airbus A321 had a storied life, variously flying for Vietnam Airlines, Cambodia Angkor Air, and SmartLynx Airlines. The Airbus A321-200 will be GlobalX’s second Airbus. In January, the airline took delivery of an A320-200 (registration N223FR). That plane is now in Miami, the home base of GlobalX Airlines.

GlobalX continues to work towards FAA certification. Subject to FAA and Department of Transportation approvals, GlobalX intends to fly as an ACMI and wet-lease charter airline serving the US, Caribbean, and Latin American markets.

Last week, GlobalX advised the FAA certification process was continuing, with the conformity review (a major phase 4 event) underway. GlobalX describes this as “a full nose to tail review by the FAA of every aspect of our first A320 aircraft.”

“All maintenance records, onboard equipment, software systems, avionics, etc., are reviewed line by line as a test of our tracking capabilities and our manuals design.

“Other milestone events, including the Mini-evac drill and tabletops, are scheduled with all crew and management staff now practicing tabletop scenarios to be fully prepared.

“We expect the final proving run flight schedule, the last certification hurdle, to be FAA initially approved next week with proving run flights expected to start as soon as tabletops and mini evac are completed and subject to FAA resource availability.”

A small start for an airline with big ambitions

By mid-April, GlobalX will have just two planes. It is a small start for an airline with big ambitions. CEO Ed Wegel has over 30 years of experience in the airline industry. He’s variously been CEO of BWIA International Airways, Chautauqua Airlines, OneTravel, and most recently, Eastern Air Lines. A senior management team with extensive experience in the North American aviation market will back Mr. Wegel.

GlobalX’s core business will be wet lease and ACMI flights for airlines and charter operations for tour operators, professional and college teams, and other groups requiring 150 seat aircraft capable of flying up to six hours. GlobalX plans to grow its fleet to between 10 and 15 aircraft from the Airbus A320 family. Then, the airline wants to stretch its wings and look at A330 aircraft. The airline’s website states;

“The Global family will incorporate all that has been learned about charter, low-cost scheduled, and long-haul low fare operations.”

Meanwhile, GlobalX is pumping up its PR tires in anticipation of receiving its second plane. The airline advises negotiations continue regarding its third aircraft.