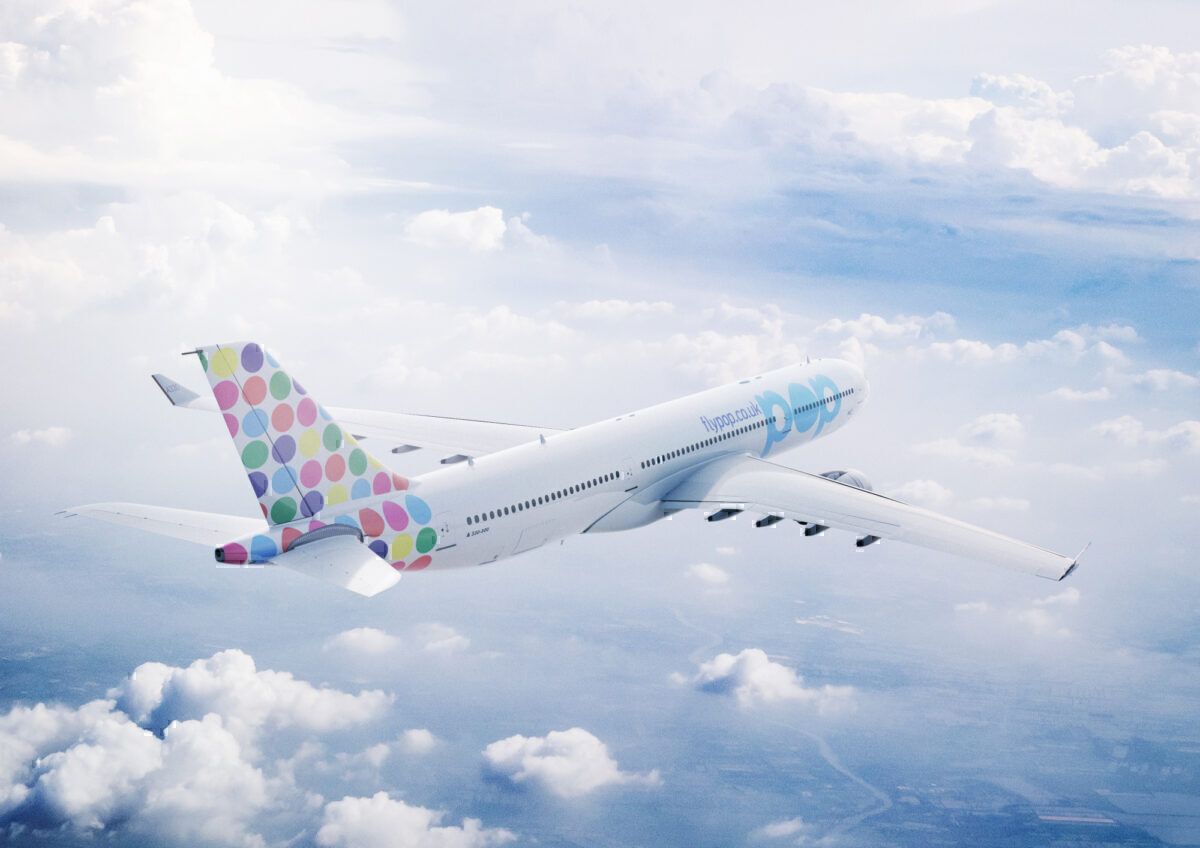 After having delayed its launch due to the COVID-19 pandemic, United Kingdom startup airline flypop still aims to become the lowest cost airline on the planet. Now planning to begin flights between the UK and India in October, flypop is hoping that India will have been added to the UK’s list of green counties by then.

Unlike other airlines that burn through cash, flypop can wait out the storm thanks to a leasing deal called “Power by the Hour” that allows flypop to only pay for the planes when it uses them, and something CEO Nino Judge says never would have been available pre-COVID-19.

flypop will use all-economy Airbus A330-300s

flypop CEO Nino Judge saw an opportunity in the marketplace to offer low-cost flights on single-class Airbus A330-300s between the UK and secondary cities in India. flypop aims to tap into the large Indian community in the UK and offer them direct non-stop flights to Amritsar and Ahmedabad without the hassle of connecting through Mumbai or New Delhi.
When speaking during a recent Simple Flying Webinar about flypop’s plan, CEO Nino Judge said:

“On the yield, Air India very kindly contested our Stansted to Amritsar for us with load factors of around 90% and average return fare of £600. That’s not a very low yield. That’s quite a high yield. That’s also a high fare, and the Punjabis were paying that to get nonstop already pre-COVID. So, you can imagine what it will be post-COVID. And yields are a funny term. Yields are the difference between CASK and RASK. So, we plan to have our CASK so low that the yield will end up being quite healthy. That’s the art of yield management. We are going to start flights from £99 ($137) one way. So if anybody wants to beat us on that, try it!”

Winter is the high season for flights to India

October has been chosen as a new start date because, unlike most destinations, winter is the peak month for flights between the UK and India. That being said, £99 ($137) is an incredibly cheap fare for a long-haul flight between Europe and India. When asked how the airline intended to offer fares this low even with a full 400-passenger Airbus A330-300 Judge said:

“Everything is cost. If you’re going to be a low-cost, long-haul, everybody says, ‘Oh, it’s not worked. It’s been tried.’ It’s never been tried properly. It’s been flirted with. We are going to live and breathe, and hopefully not die, low-cost, long-haul. Everything is a price saving that we pass on to the customers to achieve that £99. We could have gone for really nice new neos or the 787s that Norwegian didn’t want anymore, but we went for the best value, slightly older A330s, where we could drive the price down. It had a high-density configuration, and that’s what you truly get low-cost.”

flypop will be based at London Stansted

It would appear that flypop got its inspiration from Irish low-cost carrier Ryanair who offer ultra-low fares and make its money on passenger add ons like baggage, food, and drink. Not only is flypop using Ryanair for inspiration, but it has also gone a step further by hiring people who worked for Ryanair.

Having now secured its first base at London Stansted Airport (STN), flypop says that flights to India are just the beginning and that flying to secondary airports in other countries is in the airline’s plans. When speaking about possible future destinations, Judge shares that the A330s can head to lucrative destinations in the US, Sri Lanka, South Africa, South America, and the Caribbean.

So, how will flypop’s prices be so low? The answer is in the offerings. Judge shares the following:

“Legacy carriers are our premium product, right? They have got bags included, they have got meals included, you know, they’ve got goats included, we don’t do any of that. We’re just going to give you a cup of water and a rucksack. Pay for everything else. And that’s how the prices are so low. Customize your journey. You can go as low cost as you want to. We are going to be the truest low cost airline. Not just on those routes, but on the planet. And this is why we have so many fantastic Ryanair people on our teams that never let me forget, “Don’t let those costs go up!’”

Let’s hope that flypop is successful and can expand into other markets, and hopefully, unlike Freddy Laker and his no-frills, Laker Airways can take on the big carriers and survive.