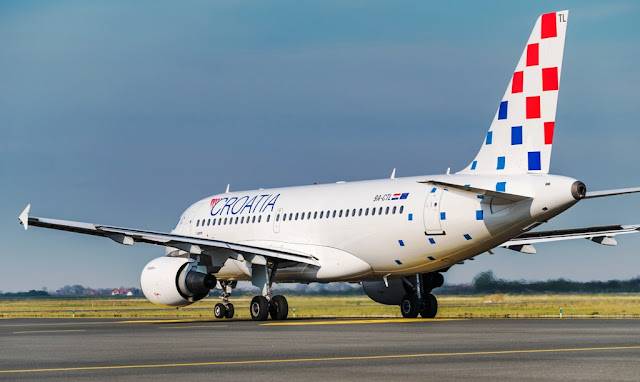 Croatia Airlines plans to operate flights to twelve international destinations from its hub in Zagreb during the coming winter season, which begins on October 31. This is compared to 25 filed by its low-cost competitor Ryanair, which will have its network fully operational from December 1. At this stage, the Croatian national carrier plans to maintain flights from Zagreb to London, Paris, Brussels, Amsterdam, Copenhagen, Rome, Frankfurt, Munich, Vienna, Zurich, Sarajevo, and Skopje. They will be complemented by its domestic network comprising of Dubrovnik, Split, Pula, and Zadar. Unlike the pre-pandemic 2019/2020 winter season, the airline will no longer run flights to Mostar, Dublin, and Barcelona.
Over the winter period, the carrier plans to run the greatest number of flights from Zagreb to Frankfurt, followed by Munich, Vienna, Zurich, Sarajevo, and Brussels. On the other hand, the most capacity will be deployed to Frankfurt, followed by Amsterdam, Paris, Munich, and Vienna. During the winter, the Dash 8 turboprop will operate the majority of flights, some 56.1% of all Zagreb operations, followed by the Airbus A319 with a 31.1% share and the A320, which will be deployed on 12.8% of all services. Due to the evolving epidemiological situation and changing travel restrictions, the airline’s winter line-up is subject to change.
Croatia Airlines will not compete directly against Ryanair on any route, although the low-cost carrier will fly to secondary airports serving Rome, Paris, Munich, Frankfurt, and Copenhagen. The Croatian airline recently noted, “The start of 2021 was weaker than expected, while the second quarter marked a slow recovery in traffic, which is still well below pre-pandemic levels. The spread of the delta variant of the coronavirus and an insufficient number of vaccinated people, as well as various restrictions in international operations, makes recovery uncertain in the short term. The company is undertaking all necessary measures to actively monitor liquidity and optimize operations. It continues to apply rigorous cost-saving measures”.