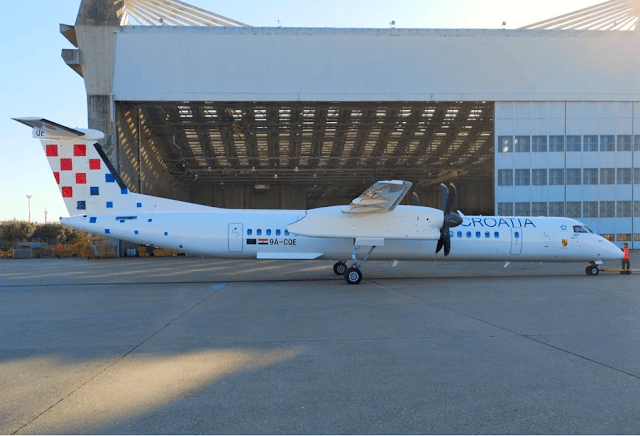 Croatia Airlines is utilizing its Dash 8 Q400 turboprops on 71.6% of its flights this January as the coronavirus pandemic continues to crush demand for air travel. The aircraft is being utilized on 486 flights this month (both directions included), compared to the Airbus A319 used on 189 flights (or 27.8% of the time) or the A320, scheduled on just four flights during the month. Based on its current schedule, the Croatian carrier has deployed the 76-seat aircraft on almost all of its routes out of Zagreb and Split, many of which are operating with a mix of aircraft types throughout the month. The only exception is its service between Zagreb and London Heathrow which is served exclusively by the A319, while the A320 has been used once to Brussels and once to Frankfurt.
Croatia Airlines has six Q400s in its fleet which have come as a useful asset during the ongoing period of reduced demand. The carrier previously noted, “As we continue to reduce costs, we have decreased capacity on many routes by deploying our Dash fleet. This winter, we will utilize the Dash aircraft much more than in previous years compared to the Airbuses”. It added, “The existing capacity we have is far too much under the current circumstances. During the first half of 2021, we expect to be using the Dashes more than before”. The usage of the Dash fleet peaked in November of last year when almost 80% of flights were served by the turboprops.
Croatia Airlines recently said it would undertake rigorous cost-cutting measures in order to safeguard jobs and preserve its liquidity. The state injected 91.4 million euros into the company over the past two months, 46.5 million of which through recapitalization, 33.2 million as an equity loan, and 11.7 million euros in direct aid. The Croatian carrier has so far introduced a number of measures to bring down costs and plans to maintain them in the coming months. In January, Croatia Airlines is operating 679 flights (both directions included) and has 64.848 seats on sale. It represents a 64.4% decline in capacity compared to the same month last year.