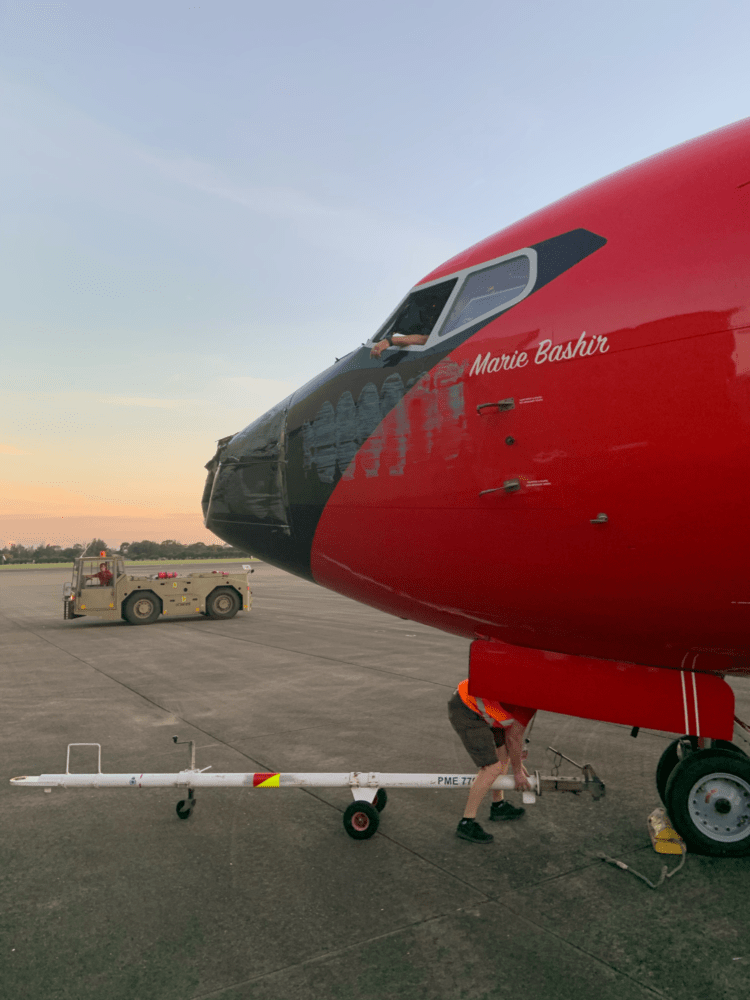 A Boeing 737-300 water bomber aircraft on lease to the New South Wales Rural Fire Service suffered extensive nose damage on Tuesday after crashing into a hangar door. The plane is part of a fleet of fixed-wing aircraft and helicopters that help fight wildfires across New South Wales and Australia.

According to a SkyNews report, the Boeing 737-300 Marie Bashir (registration N138CG), was taxiing across the apron at RAAF Richmond outside Sydney when the incident occurred. The aircraft hit a hangar door, damaging the nose and an engine. There were no injuries. But pictures of the damaged plane on social media do suggest extensive nose damage.

“The aircraft has rolled into a hangar, sustaining damage to the aircraft and the building,‘ a Rural Fire Service spokesperson told Simple Flying.

Along with a Cessna Citation bird-dog, N138CG is one of two Boeing 737-300 water bombers contracted to the New South Wales Rural Firefighting Service by Coulson Aviation. Coulson is providing the aircraft, crews, and maintenance services under a 10-year contract. The Cessna Citation and the Boeings work as a team. The smaller plane flies in first to get a handle on the nature and scope of the wildfire, radioing that information back to a nearby orbiting Boeing.

Depending on the terrain, the 737-300s will sweep in as low as 50 meters to dump water on the fire. That calls for a particular skill set. In addition to the Boeings, the Rural Fire Service has more than 100 call-when-needed and contracted aircraft available to it. They form the single largest aerial fleet of any fire agency in Australia.

The two 737-300 water bombers at based at RAAF Richmond, 50 kilometers northwest of Sydney. The first time the water bombers were used was in late 2018. One of the 737-300s dropped several loads of retardant on wildfires threatening Newcastle, just north of Sydney.  At the time, New South Wales at the end of a prolonged drought. Much of the countryside was very dry – “tinderbox conditions” as the locals call it.

Water bombers prove their worth

One year later, the decision to lease the water bombers paid off. The planes made international headlines helping out during the extensive east coast wildfires in late 2019. Coulson Aviation Australia is the first aerial firefighting company in the world to modify Boeing 737s into approved firefighting planes. The modification required over 43,000 hours of labor by over 100 aircraft workers.

N138CG is nearly 26 years old. In her former life, she flew Southwest Airlines passengers around the United States as N608SW. Coulson Aviation acquired the plane in 2017.

Coulson Aviation is building a decent business converting former passenger planes into water bombers and is flexible about the configurations. The New South Wales Rural Fire Service wanted a water bomber with the capacity to move firefighters around. So after the conversion, in addition to carrying 72 passengers, the modified 737-300s can hold 15,150 liters of water in their tanks. Shortly after the conversion and delivery to the Rural Fire Service, Coulson Aviation said;

“With a full retardant load and 4.5 hours of fuel we are so far under max gross weight we are going to leave the full interior and galleys in even when just in air tanker mode.”

The Rural Fire Service says the Boeing 737-300 will stay on the ground until repaired. They have launched an investigation into the incident.