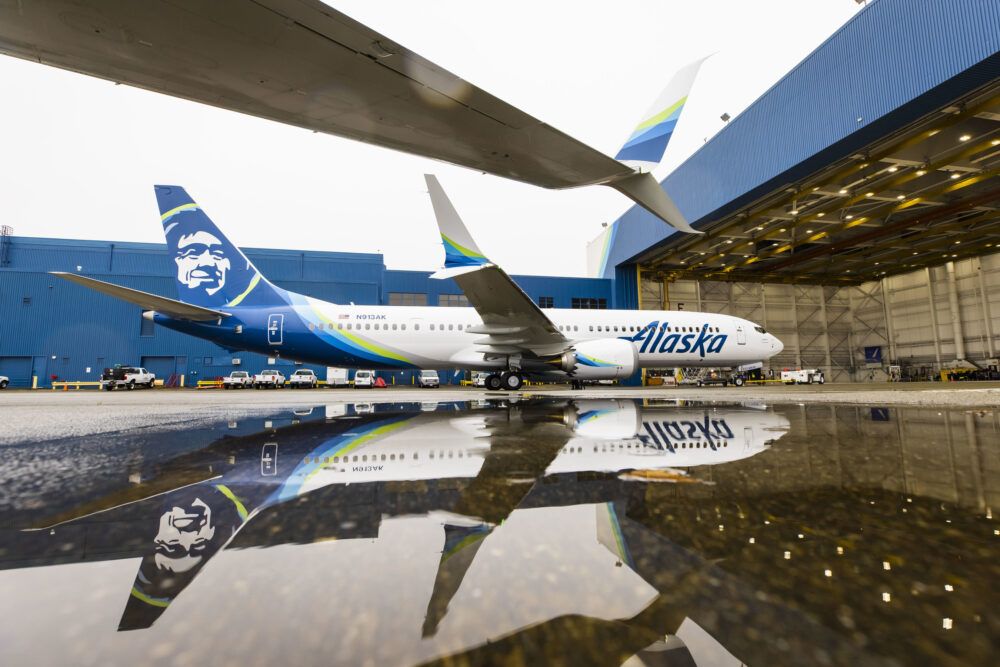 Alaska Airlines has its roots as an all-Boeing carrier. The airline used to operate a fleet of all-Boeing 737 jets and is keenly looking forward to retiring its Airbus jets. On the airline’s fourth-quarter earnings call, Chief Financial officer and Executive Vice President of Finance Shane Tackett quickly pointed out that Alaska has a history with exercising aircraft options.

Alaska Airlines took delivery of its first Boeing 737 MAX 9 on January 24th. The carrier is eagerly awaiting the start of revenue passenger service with the MAX from March 1st. Alaska Airlines President and future-CEO Ben Minicucci stated the following on taking the MAX:

“We’ve eagerly waited for this day. It was a proud moment to board our newest 737 aircraft and fly it home. This plane is a significant part of our future. We believe in it, we believe in Boeing and we believe in our employees who will spend the next five weeks in training to ensure we’re ready to safely fly our guests.”

In December 2020, Alaska Airlines reached an amended agreement with Boeing for MAX jets. The airline expects to receive a total of 68 Boeing 737 MAX 9s once deliveries are completed. Of the backlog of 67 jets, 12 more are expected to arrive in 2021, 30 in 2022, 13 in 2023, and another 12 in 2024. The MAX deliveries will accelerate the removal of the Airbus planes from Alaska’s fleet.

As part of this agreement, Alaska Airlines has the option to take 52 more jets. If exercised, those options will take its overall fleet of Boeing 737 MAX jets to 120 planes.

Alaska has a history of taking options

“I think we were really clear along the way with our good friends and partners at Boeing on what we needed in order to place an order, especially right now, in where we are in the pandemic sort of cycle here, that has 68 firms and a lot of options. Our history with options is we take all of them, and so it can be quite a large order for us, and a significant amount of capital that we’ve got to go make work for us. So, I think we feel very good about the deal that we struck with them. We’re really excited about the path we’re on now. There’s a lot of operational efficiencies and savings we can get by by getting into a single fleet.”

An option in aircraft purchasing is a guarantee from a manufacturer for a certain number of delivery slots and at a pre-determined price. So, in the future, if market conditions justify a fleet expansion, airlines can exercise those options and turn them into firm orders. Some carriers end up exercising their options while others do not. If an airline chooses not to exercise an option, that delivery slot can go to another airline.

For Alaska Airlines, the easy equation is to take on those jets and either retire some older Boeing 737 Next Generation jets or else use them to expand their operations and touch more points on the East Coast or perhaps into points in Central America.

Early on in the call, Mr. Tackett stated that the agreement offers the airline significant flexibility in deferring jets and also giving the carrier full substitution rights to other MAX models. This is the part of the agreement that is incredibly interesting.

Alaska Airlines is in an interesting spot with the Airbus A321neos. These planes work well in certain markets, and the carrier has shown no inclination to get rid of those jets right now. Andrew Harrison, Executive Vice President and Chief Commercial Officer at Alaska, stated the following on the A321neos in the earnings call:

“They’re going to stay in our fleet in the foreseeable future. But I think we’re open to the possibilities and what we can do for that, but for now they’re in our fleet and we intend to operate them.”

At the end of 2020, I speculated about Alaska Airlines opting to take the Airbus A321XLR with its cancelable order for 30 Airbus A320neos. That could still be an option, but it depends a lot on what Boeing does.

With the fully flexible rights to take the MAX 10 and the option for Boeing to secure more MAX orders, it would not be surprising to see the airline and the manufacturer collaborate on some performance improvements on the MAX 10.

Or, Alaska Airlines could do something with those 30 Airbus orders it has and augment its A321neo fleet. This would be a possible solution for the airline if Boeing’s MAX 10s absolutely cannot do what the airline needs it to do and the carrier relents to operating a dual-fleet.

If the two Seattle-area giants can make things work, then expect the airline to take those options, and probably more than 10 of them, that would put the carrier in a position not just to serve slot-constrained airports with higher-gauge aircraft but also upgauge flights across the system without compromising on fleet efficiency and lower operating economics.