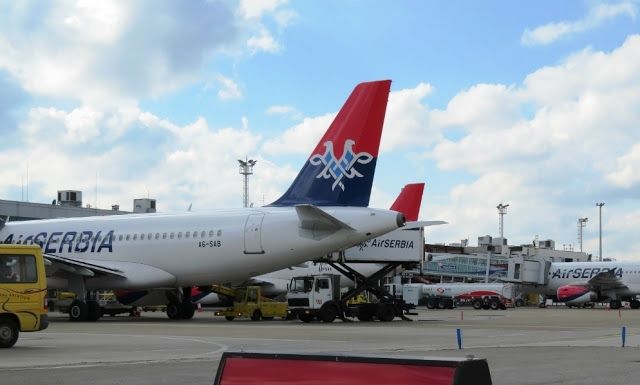 Air Serbia intends on resuming flights to the Middle East and North Africa (MENA), despite initial plans to significantly downsize its operations in the region. The carrier has restored ticket sales for services to Cairo and plans to return to Tel Aviv as well, while an inventory listing has been filed for services to Beirut, although tickets are yet to be put on sale. At this point, the Serbian carrier will resume flights to Tel Aviv on March 29, with two weekly rotations to be maintained, down from five weekly services in the summer of 2019. The resumption date will depend on travel restrictions. Israel will suspend all commercial flights as of this evening for a week to prevent the spread of new variants of the coronavirus and has banned all travel for its nationals, with exception to those for medical purposes.
Flights to Cairo are set to restart on June 4 and operate twice per week. The airline resumed ticket sales for the route late last week after several months. Services to Cairo were launched as part of the airline’s 2019 network expansion, which included nine new routes from Belgrade. During 2019, the carrier also maintained two weekly services to the Egyptian capital. Serbian nationals are permitted entry into Egypt with a negative PCR test, which can also be conducted at the airport upon arrival. Egyptian carrier Air Cairo has been maintaining services between the two countries since June with scheduled flights between Hurghada and Belgrade.
Air Serbia has filed an inventory listing for its service to Beirut based on which it plans to resume flights on June 9 and operate between three and four weekly rotations to the Lebanese capital throughout the summer. However, ticket sales are yet to begin. An inventory listing indicates the airline plans to operate the service if circumstances permit but that a final decision has not been made, meaning the flights could be removed. Air Serbia suspended operations to Beirut just weeks prior to the onset of the global lockdowns in March 2020 due to the deteriorating financial situation in Lebanon. At the time it said the route suspension would be temporary and would resume in June of that year. Beirut was served up to seven times per week during the summer of 2019.

Citing high passenger demand, Dubai-based Emirates airlines announced that starting from today, it would be offering a s …