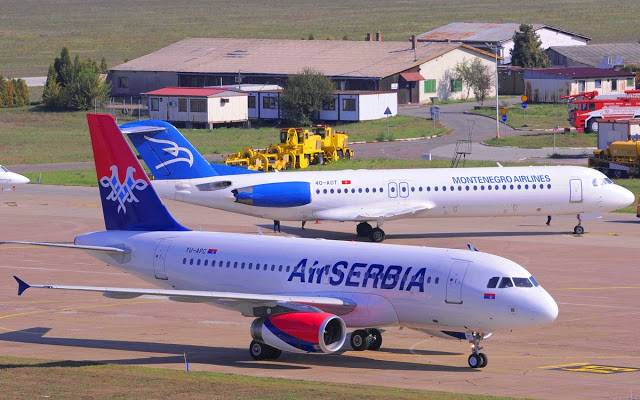 Air Serbia has started adding flights and has more than doubled its capacity to Montenegro compared to its initial plan over the coming days. It comes amid the collapse of Montenegro Airlines, leaving the Serbian carrier as the sole operator between the two countries, which is the busiest cross-border market in the former Yugoslavia. The Serbian airline has added additional departures to Podgorica following an increase in bookings while capacity has been boosted from the 66-seat ATR72 turboprop aircraft to the 144-seat Airbus A319 jet on December 29 and 30, as well as January 2, 3, and 10. Services to Tivat have also been upgraded from the ATR72 to the A319 over the coming days. The airline has added an additional departure to Podgorica this evening to deal with the increased demand.
Air Serbia has seen an uptick in transfer passengers originating from Montenegro that were initially scheduled to fly with the Montenegrin carrier. Some forty travelers in total will be transferred today onto various services, primarily Germany, France, and Slovenia via Belgrade. Commenting on the matter, Air Serbia said yesterday, “Due to new circumstances and the suspension of Montenegro Airlines flights, Air Serbia will continue to provide strong links between cities in the region, Europe and the Mediterranean, as well as North America, through its hub in Belgrade. The Serbian national airline will carefully monitor possible changes in demand during the next period and adjust its capacity and frequencies to those changes”.
Serbia and Montenegro is the busiest cross-border market among the former Yugoslav states with 548.679 passengers traveling between the two last year. This year was set to be another record-breaker. Prior to the pandemic, Air Serbia and Montenegro Airlines planned to jointly operate 103 weekly flights between the two countries at the height of the summer season, with the Serbian carrier scheduling sixty weekly services, while its Montenegrin counterpart 43. Flights between the two were suspended on March 18 due to the pandemic and resumed in mid-August, marking the longest period without operations between the two states in the post-World War Two period. Demand has been slow to recover with Serbian nationals initially restricted from entering Montenegro for the majority of the summer, while PCR test requirements continue to hamper demand on both sides.

SpiceJet has announced 66 new domestic routes, including dozens of regional routes under the UDAN-RCS scheme. Many route …