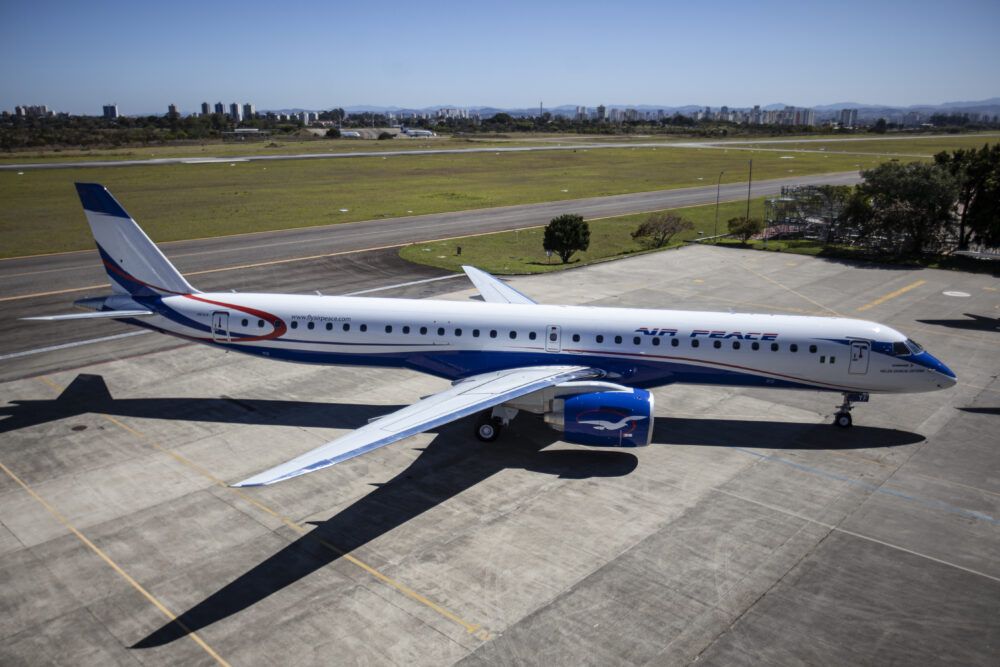 Nigeria’s Air Peace has taken delivery of its first Embraer E195-E2 this week. While the delivery of any new aircraft type is notable, the business cabin on this E195 is particularly unique, offering all passengers direct aisle access. Let’s find out more about this groundbreaking cabin design.

Usually, business class on regional jets isn’t a notable experience, with relatively narrow seats in a 1-2 or 2-2 configuration. However, Air Peace’s new E195 fleet shatters this idea of not having direct aisle for all business passengers.

As shown below, the carrier has given every passenger direct aisle access by offsetting each seat from the one next to it. This allows passengers to enter and leave their seats without disturbing or needing to hop over their seat neighbors.

While this cabin design isn’t exactly new, it might be the first time the concept has been applied to a regional jet. Other airlines have used similar layouts on their widebody business class seats, allowing them to maintain a 2-2 seating configuration but offering a path to the aisle for everyone. Carriers like Korean Air and Gulf Air use this layout in their long-haul aircraft.

Registered 5N-BYF, the new E195 marks the first delivery for Air Peace and the first E2 jet to any African airline. The leading Nigerian carrier will deploy the aircraft on regional routes, taking advantage of the plane’s impressive 2,600 nautical mile range.

In a statement, Chairman and CEO of Air Peace, Allen Onyema said,

“The E195-E2 is the perfect aircraft to expand our domestic and regional operations. We are aware of the aircraft’s impressive economic performance as well as its unique configuration, the major reasons we placed an order for this aircraft.

”The E195-E2 aircraft will further help us actualise our ambition of connecting not just the whole of Nigeria, but the entire African continent, while feeding long-haul flights from our Lagos hub.”

The aircraft is the first of 13 that Air Peace has on order with Embraer. The airline increased its order for the regional jet in late 2019, with deliveries slated to start in Spring 2020. However, as the pandemic disrupted plans globally, the timeline has been pushed back. Data from Planespotters.net shows that four more E195s are already in production for Air Peace.

The new E195s are a part of Air Peace’s plans to grow within Africa and launch long-haul routes to Asia, North America, and Europe. While the carrier is now the biggest in West Africa, the pandemic has slowed its long-haul ambitions. Upcoming destinations included Mumbai, Tel Aviv, London, and more as its fleet expanded. For now, the airline’s only long-haul route will be Lagos-Sharjah, which resumes in February.

Nevertheless, the introduction of the E195 will make for a much more comfortable journey for those on the plane. Details on which routes the E195 will fly will be released in the coming weeks when the plane enters service.