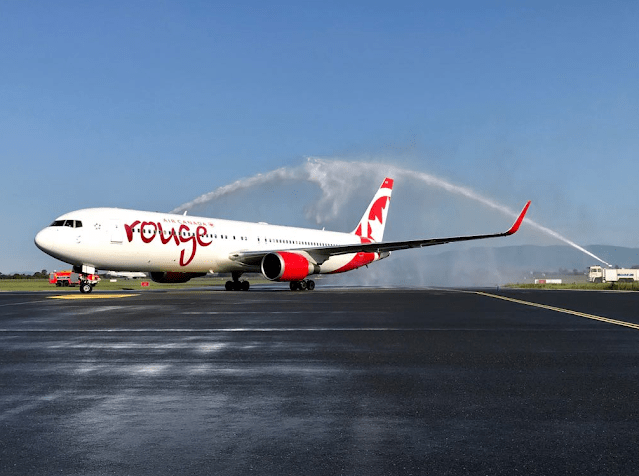 Air Canada Rouge has terminated its planned flights between Toronto and Zagreb, just days after its parent company Air Canada received government approval to take over leisure carrier Air Transat, which also maintains services to the Croatian capital. Ticket sales for Air Canada Rouge’s seasonal flights to Zagreb were removed this week. They did not operate in 2020 due to the coronavirus pandemic but were scheduled to be restored on May 6 and run four times per week until early October. A total of 140 operations were planned (both directions included). The leisure brand no longer has any widebody aircraft in its fleet after retiring the Boeing 767-300 jet last year, which used to be deployed on their Zagreb flights. The carrier has also terminated planned services to other Central and Eastern European cities in its network, including Warsaw and Bucharest.
Last week, the federal government approved Air Canada’s purchase of competing airline Air Transat under a series of strict terms and conditions it said, “are in the interest of Canadians”. It is believed Air Canada will now fold the Rouge brand into Air Transat. Chances of both Air Canada and Air Transat serving the Zagreb route under their own brands is unlikely and could raise competition concerns in Europe. The European Commission warned, “The Commission is concerned that the transaction could significantly reduce competition on 33 origin and destination (O&D) citypairs between the European Economic Area (EEA) and Canada. The Commission’s preliminary market investigation revealed that Air Canada and Transat have been historically competing head-to-head for the passenger air transport services between the EEA and Canada”. It added, “In particular, Air Canada, with its Air Canada Rouge brand, developed a business model to address the lower-cost and leisure-oriented nature of the EEA-Canada passenger air transport markets, thus directly competing with Transat”.
The Croatian market has been successful for both Rouge and Air Transat. In 2019 they handled 65.486 passengers, a 14.6% increase on the year before. Air Transat has confirmed it plans to restore its seasonal flights between Toronto and Zagreb this summer. Services are scheduled to restart on May 11 and are to gradually grow to up to three per week during the peak summer months. The airline intends on operating a total of 114 flights (both directions included) and offering 36.660 seats on board its Airbus A330-200 jet. Air Transat’s service to Zagreb relies on a mix of leisure travellers and those visiting friends and family. However, all Canadian citizens are currently required to quarantine upon arrival back into their country for two weeks. Furthermore, entry for most foreign nationals is banned into Canada. Although the policy may change by May, these restrictions have been in place for almost a year and there is no indication they will be lifted any time soon.