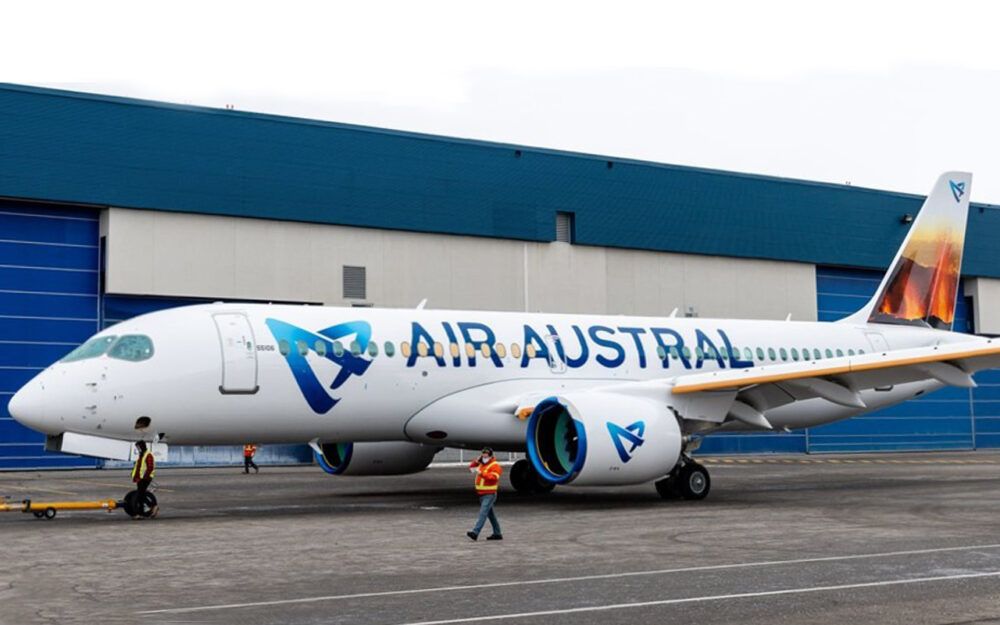 Air Austral’s very first Airbus A220 has been spotted outside the paintshop with its paintwork all complete. Along with a beautifully adorned body and azure blue engine surrounds, the aircraft’s tail is something very special. Air Austral plans to launch its first flights with the aircraft in late February.

Air Austral’s first Airbus A220 has rolled out of the paint shop in Montreal this week with a gleaming coat of fresh paint. The aircraft is, as most are, mainly white, but with a beautifully applied Air Austral logo, complemented by a blue engine surround. But the real eye-catcher here is that stunning tail.

According to Airbus, the tail has been painted with scenes from Air Austral’s home island of Réunion in the Indian Ocean. The volcanic scenery on one side of its tail is contrasted by a coastal view on the other. It’s an intricate, ambitious livery, and the Airbus paintshop has pulled it off beautifully. It’s further complemented by an orange painted leading edge to the wing.

Eagle-eyed readers may have noticed that the aircraft is not quite complete. Most of the essentials are there, but for now, it is missing its winglets and not quite ready to fly. These will likely be added in the coming days ahead of its first flight tests as the aircraft prepares for delivery to the airline.

Other operators often customize their winglets too, such as Deltas plain blue scheme or airBaltic’s logoed tips. Swiss goes for the Swiss cross on a red background while JetBlue echoes the ‘hops’ design on its A220s tail. What Air Austral will go for remains to be seen, but we’re hoping for something as pretty as that tail!

When will Air Austral fly the A220?

Air Austral placed an order for three Airbus A220-300 aircraft in October 2019. These will be the first Airbus aircraft to join the fleet and will be replacing its ATR 72-500 and its two Boeing 737-800. For Air Austral, the A220 is a super match, giving it the flexibility to serve both small airports in remote locations while also being able to fly significant distances from its home on Réunion.

The range of the A220 puts most of Africa in reach, as well as points in the Middle East and even India. The airline usually serves destinations in Madagascar, Mauritius, the Seychelles and South Africa with its narrowbody aircraft, but could look even further afield as these planes start to arrive.

The latest from the airline is that service will begin in February 2021, with a launch route planned between Réunion and Mauritius. The first flight is scheduled to take place on February 22nd, so Airbus is going to have to undertake some serious flight testing to get the aircraft accepted and delivered before that date.

Following the start of that service, which will be twice weekly, Air Austral will begin serving Antananarivo in Madagascar from March 6th. These dates are, of course, subject to change, and with the global aviation industry in the shape it is right now, it wouldn’t be a surprise to see them pushed back.

Nevertheless, with stunning tail painted and body almost complete, Air Austral’s first A220 is nearing its first flight and its new life of flying around the Indian Ocean.