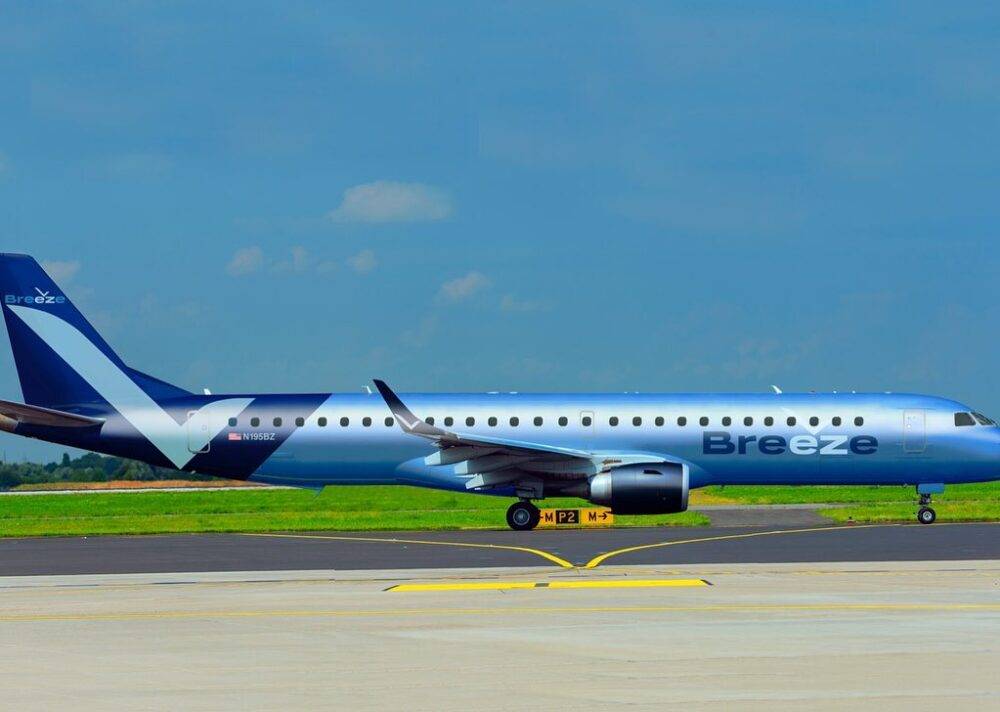 US start-up Breeze Airways is gearing up for its first flights this year. If all goes well, the airline hopes to connect travelers with a mostly point-to-point route map. Starting first with Embraer aircraft, the airline will be starting its operations in the midst of one of the worst crises in the aviation industry, but with the right aircraft, and perhaps the right mindset.

The concept of Breeze Airways has been around for over a year at this point. Seeking to be one of the “nicest” airlines in the United States, the carrier wants to bring back the joy of flying. If you’re wondering how it hopes to do this, take a look at JetBlue. David Neeleman, the leading man behind Breeze, set up JetBlue to be a well-renowned passenger airline– which it is.

The goals for Breeze Airways are to offer lower costs but to be better than a low-cost carrier. It is actively recruiting younger new hires in the hopes that it will be able to have a lower cost structure than its competitors in the United States.

Breeze Airways has already revealed some vague details about where it wants to fly. The carrier is seeking to insert itself into “neglected” and “forgotten” cities. It is hoping to start its operations with service on points “east of the Mississippi River” and primarily cater to north-south traffic. Mostly these routes are leisure-based.

The right aircraft for the time

While the airline plans to fly up to 60 Airbus A220-300s, initially expected from 2021, it will be starting up its operations using 118-seat Embraer E195s leased from Azul in Brazil. Mr. Neeleman previously had a role in founding Azul Linhas Aereas. The first of Breeze’s aircraft have already arrived in the United States.

Embraer regional jets have been powering the aviation industry’s recovery. These planes are smaller and well-suited for a lot of short-haul routes with lower demand. Filling up a 118-seater plane is much easier than filling up a 190-seater one on many point-to-point routes.

The E195s are also more comfortable than many other narrowbodies. The plane is outfitted in a 2-2 configuration, which means no middle seats. Breeze will likely be operating routes in the two-hour range or less, which will make the E195s perfect to use for initiating operations. The A220s will help expand and grow those operations.

Does Breeze have the right mindset for 2021?

There is no good crystal ball for how demand will return in 2021. Each airline has taken a different tactic to get itself out of the crisis. Airlines like Alaska, American, and Delta have focused on their core hubs, seeking to leverage a larger connecting network to keep its aircraft full. Other airlines, including JetBlue, have also turned to point-to-point operations as a means to fill their aircraft.

Breeze Airways is entering with a point-to-point mindset, which is a pretty good one to have right now. The airline does not have established hubs where it already has the groundwork set up to operate hundreds of flights per day and manage any operational difficulties that may pop up in a day. As such, focusing on point-to-point routes, Breeze can work to get new customers onboard its planes first before considering whether it will want to operate a focus city or hub-and-spoke style of operations.

Without an existing base of customers to tap into, gaining new ones is of the utmost importance. And, point-to-point routes will likely go a long way in doing that.

Breeze Airways is not going to become a giant overnight. It will take time and a lot of effort, but the carrier has the potential to make a splash this year by providing a sample of what it intends to provide moving forward. It could give major US airlines a run for their money. Already, JetBlue’s CEO has said he thinks the airline could be a success.